DO NOT EAT THIS UNEMPLOYED CAT

We once saw a poster that said “Birds don’t have careers,” and it really made us stop and think because, you know, they really don’t. Unless they are carrier pigeons, or those parrots that live on pirates’ shoulders, or are part of a magician’s act. Otherwise nope: birds are more the freelancing, artsy type.

But if birds don’t have careers, cats definitely do, at least according to those highly toxic pesticides that the D.A. recently confiscated in Chinatown that read, “The Cat Can Be Unemployed.” Just a warning! Also, these products can kill you and your children. And they smell like cookies.

Yesterday the New York Times reported the arrest of 12 individuals after a raid on stores (mostly in Chinatown) revealed 6,000 vials of illegal over-the-counter rat and cockroach poison. These mixtures contained over 61 times the allotted amount of brodifacoum allowed by U.S. laws, a chemical is so potent it can only be handled by people wearing essentially hazmat gear while spraying it, and it can definitely be toxic enough to kill a small child, which is probably why the fun little cartoon mouse label was a bad call. (Ironically, the EPA is also trying to ban brodifacoum because it will kill your cat, who may already be suicidal after losing its job.) So was putting the pesticide on easily-accessible bottom shelves. And also this, from D.A. Cyrus R. Vance Jr.:

“(The products) are particularly dangerous to kids because they look and smell like cookies or other objects that would attract the human touch.”

So if you see a bottle featuring a smiling cat that is going on public assistance, and it smells like cookies and looks like something that a human (you) would like to touch, please get in contact with poison control immediately and dial 9-1-1. That unemployed cat is trying to kill you. 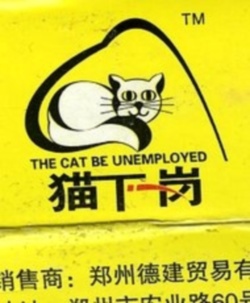