Christie turned that around by using Cryan’s public jobs as an argument that government is too bloated.

“He’s a state Assembly majority leader who’s also an undersheriff,” the governor said to a roomful of jeers. “I don’t know where he finds the time but I guess he must.”

Christie says he wants an up or down vote on his ethics reform package, which would require Cryan to scrap one of his public salaries.

A range of dignitaries including state Senate Minority Leader Tom Kean Jr., (R-21), Westfield, and Assembly Minority Conference Leader Jon Bramnick, (R-21), Westfield, sat behind and to the sides of the governor in the boys and girls club quarters near the downtown business district.

Christie said he wants to forbid dual office holding but knows the Democrats don’t want to do anything in the way of reform.

In the meantime, other headlines dominated.

“A tough day,” was the muttered response to a question regarding the arrest earlier today of Marie Munn, the president of the Elizabeth Board of Education.

Tony Monterio, the former Elizabeth Councilman and unsuccessful District 20 Assembly candidate, was an organizational ally of Munn’s – and of Gov. Chris Christie’s. He stood among the dignitaries at the head of the room for Christie’s first town hall in 76 days .

Also present was Helen Rosales, head of the Elizabeth GOP.

“My campaign will have a website up and running soon,” Rosales told PolitickerNJ.com.

But the lingering after-effects of Munn nagged at conversations as sources close to the Elizabeth Board of Education said Munn needs to resign after allegedly allowing her children to participate in the school lunch program even though they are ineligible.

“She has to resign, not just from the presidency but from the board,” said the source. 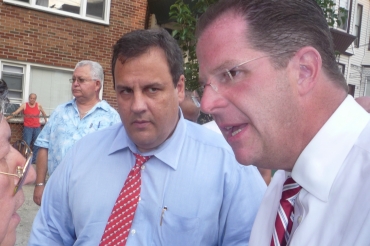