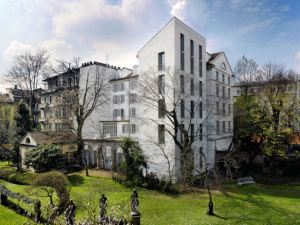 After doing business for more than 40 years in London, Lisson Gallery opened a new branch in Milan today, with a group show curated by the British artist Ryan Gander. Vogue Italia reports that the new space is housed in an early-20th-century building on the city’s Via Zenale, not far from the Santa Maria delle Grazie monastery, the site of Leonardo da Vinci’s Last Supper mural.

Lisson’s decision to open in Milan cuts against the movements of many of its rival top-tier galleries, who have rushed to start branches in London and China in recent years. One of the few international galleries with a presence in Italy, Gagosian, opened in 2007 in Rome, the adopted hometown of gallery artist Cy Twombly.

The Wall Street Journal published a brief interview with Mr. Logsdail, and though it largely avoids the topic of commerce, we learn that the veteran art dealer has a sizable collection of vintage radios, that he enjoys 19th-century adventure stories and that he is a flea market devotee. He also shared this charming story, about a visit to some collectors’ house:

“I was given a very warm welcome, but the first thing I noticed was that the work in question was hung upside down. It was a situation that could have potentially been very embarrassing for the collectors, and it took me half an hour to see how this error could be communicated with good humor, turning it into a joke and not making them feel humiliated. Everyone has to learn, and the great thing about contemporary art is that we are all in the process of learning and accumulating more knowledge.”