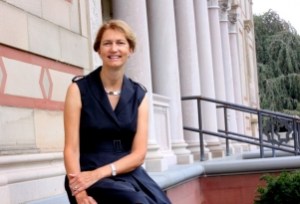 Ms. Wiles is a university museum veteran. Prior to running the museum at Oberlin, she served as curator of Wesleyan University’s Davison Art Center, after beginning her career at New York’s Morgan Library, as a curator in its department of prints and drawings. She holds an M.A. in art history from Hunter College and a Ph.D. in art history from the City University of New York’s Graduate Center.

Prior to the opening of the Johnson Museum, Cornell’s art collection was shown at the Andrew Dickson White House on campus, where the late artist Willoughby Sharp organized the 1969 exhibition “Earth Art,” one of the first major museum exhibitions about contemporary artists using the land to make work.