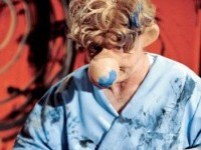 In this week’s culture pages, The Observer published two articles about the sprawling career retrospective of the painter Willem de Kooning currently on view at the Museum of Modern Art.

And then we started wondering, who, according to some other critics, was de Kooning, after all? Who is he to us today? In the spirit of googlism, we decided to round up a bunch of characterizations of the artist from recent reviews, ones that answer the question “de Kooning is” or “de Kooning was.”

So. Here is what we found when we took a look at reviews in the Village Voice, the New Yorker, and the New York Times.

“the most famous painter who threw everything away in the ’40s.” (Schwendener, Voice, quoting de Kooning biographer Mark Stevens)

“an open door that painters as disparate as Amy Sillman, Mary Heilmann, Terry Winters, and Joyce Pensato have all walked through looking for new painting.” (R.C. Baker, Voice)

“the greatest of American painters, and lesser only than Picasso and Matisse among all artists of the 20th century.” (Peter Schjeldahl, New Yorker)

“a deliberator. Every painting was a controlled experiment.” (Cotter, Times)

“complicated” (Cotter, Times) (“Most usefully the show lets de Kooning be complicated: it presents his art as a bifurcated yet unitary phenomenon.”)

There you have it. But de Kooning is often called an “artist’s artist” and so we give the last word to an artist. Paul McCarthy’s video installation The Painter in MoMA’s project room in 1995 had a manic painter wearing a blond wig, a bathrobe, and argyle socks, pacing around his studio, wielding unwieldy brushes, cutting off his own thumb, and, of course, painting, or trying to, while muttering “De Kooning! De Kooning! De Kooning!” Talk about anxiety of influence. Have a look at the video. It’s right here.