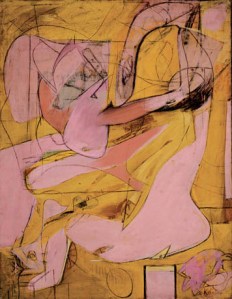 “De Kooning: A Retrospective” is a rare chance to see a career writ large. While exhibitions referred to as retrospectives sometimes survey a scant dozen years of an artist’s life, this one spans the 20th century—de Kooning was born in Holland in 1904 and died in Long Island in 1997. Not all of “de Kooning,” which features some 200 paintings, is spectacular—but just try being at your best for nearly seven working decades.

The best part of the show is the extended first gallery. Lining this large room is an embarrassment of inky Black Paintings—in one case, eight of them on a single wall. De Kooning began making these in 1947, but in 1948 he made the radical switch from oil paint to commercial enamel, and from canvas to cardboard or Masonite. These supplies came from a sign-painting store on the Bowery, and de Kooning chose the monochrome because commercial colors faded. His Abstract Expressionist peer Jackson Pollock’s early drip paintings have the same palette; the de Koonings are influenced by the swirling Surrealism of Arshile Gorky. These pieces, among which Black Friday (1948) is the standout, are gestural and loose, and suggest an unconscious figurative process working parallel to the abstract surface. They marry interiors and exteriors, landscape and surface: the rest of the show comes out of this almost infinitely dense material.

But the show officially begins, in this same long gallery, with some orienting juvenilia: Still Life (Bowl, Pitcher, and Jug), from his art school days in Rotterdam, and a crystal-clear pencil drawing of his wife, Portrait of Elaine (1940-41), tie him to an academic and commercial art tradition, but are mere academic novelty; the fascinating Self Portrait With Imaginary Brother (1938), and de Kooning’s Seated Woman (1940), a rose-period Picasso seen through Technicolor goggles, do better. (Given such comprehensiveness, you wonder why Robert Rauschenberg’s Erased de Kooning (1953) is omitted later in the exhibition; it might have commemorated that moment when, for a young artist like Rauschenberg, taking on the biggest artist in New York meant taking on de Kooning.)

If both Baudelaire and Elizabeth Peyton equate makeup with paint, de Kooning is of the school of Rubens and Guston, Cecily Brown and Elizabeth Neel, who see paint as the stuff of flesh itself. “Flesh was the reason why oil paint was invented,” the artist said in 1949, and his career and his heirs bear this out. These works conjure sprawled, almost bisected women, pneumatic and seemingly ravenous.

Then, the exhibition proceeds to the fine and peaceful landscapes of the 1970s. These paintings are white, atmospheric and, one after another, are solid the way paintings are when an artist is working at the peak of his abilities. They suggest that de Kooning has made his peace with Greenberg’s rejection: if loving landscapes and figure painting dooms you to a life of Long Island seascapes and beautiful lovers, so be it, these paintings seem to say.

Yet it’s not quite enough of a rationale, and by the end of the 1970s, de Kooning feels too comfortable with the unresolved ambiguities in his work. The vast quasi-landscape quasi-abstract pictures float out flat pink-and-yellow fantasies of light without any of the anger or the drama of the younger man. They are painted in what one of de Kooning’s girlfriend’s children once called “ice-cream colors”: sherbet blues, yellows, pinks, orange-reds and whites. De Kooning described them as “my gorgeous Howard Johnson colors;” they are not so much sublime as decorative.

The final two decades of de Kooning’s life were fraught by Alzheimer’s, a disease more debilitating for the artist than the alcoholism that had preceded it. While previous retrospectives (MoMA 1969; Whitney 1983) predated this period, and the modest 76 paintings of the 1993 Met retrospective circumvented the problem, “De Kooning: A Retrospective” is full scale. The problem is this: de Kooning stopped painting around 1990, and many question the validity of works signed by the artist after 1985. The exhibition dives right into this embattled territory, showing work made in his studio in the late ’80s. According to Mark Stevens and Annalyn Swann’s recent biography, assistants traced shapes on canvas during this time and mixed colors for the artist, so it is unclear what to make of the interlocking shapes and palette of Untitled I (1985) and other paintings on display.

Worse than the erasure Rauschenberg enacted on de Kooning when he was in his prime are these paintings. The colors are not just pastel—they are prefab. Choice and will, those essential attributes of Ab Ex painting, have left the equation. If there is financial motive to validate the late de Kooning, to the canny eye this portion of the show doesn’t achieve that goal.

Yet the exhibition does give us the full story of de Kooning through his paintings, and it reads to the lover of painting with all the pathos of a Balzac novel—a tale of the young and ambitious artist who comes to the city, makes it big, and over the course of a century is exposed to every enviable pleasure and, finally, to almost unbearable negation. This show is the retrospective not merely as Lost Illusions, but as the entire Comédie Humaine.

But ultimately if this is show about painting—about picture planes and paint, stillness and space, and the prefiguration of what artists like Jose Lerma, Dana Schutz or Lesley Vance are doing today—it is also a show about what museums will or won’t do in the future and what galleries will do in response.

With Mr. Elderfield retired, where will we find the curators to put on shows like this? There is clearly an audience for this art, as the escalation of curated blue-chip gallery exhibitions evince. But to launch such an exhaustive retrospective takes not just the desire, but also the knowledge of both the field and of the collections; few young museum curators, who seem today more party-planners than scholars, have this training. But de Kooning is New York’s own Picasso—discredited, even corny at times, but essential and vast. It is museums, and not galleries, that can properly tell this kind of story. Let’s hope the future grants them good storytellers.