Doyne was the judge earlier this year who ruled that Gov. Chris Christie’s education aid cuts were unconstitutonal, and demanded the state pony up $1.6 billion to adequately fund schools.

An advocate of school funding reform, Doherty said today’s state AG’s Office arrests of Munn and others for allegedly falsifying information on applications for the Elizabeth Public Schools Free and Reduced Price School Meals Program represented “the tip of the iceberg.”

The case epitomizes what’s wrong with the funding system that Doyne defended in his decision earlier this year, the senator said.

“Judge Doyne and the Supreme Court owe an apology to the state of New Jersey,” Doherty told PolitickerNJ.com. “We allow people to cheat and commit fraud.”

Doherty had reached out to the Christie administration demanding that the AG’s Office inspect alleged abuses in the Abbott schools.

“I’m glad it’s finally being looked into but our Supreme Court  had no idea what they were talking about,” Doherty said. “To restore millions based on a corruption system when nobody’s been asking any questions – it’s just wrong. They have been looking the other way while people have been committing fraud. They have been standing up for the path of least resistance and we’ve been sending the wrong message.

“I have Judge Doyne’s decision at my fingertips,” Doherty added. “I read it often and grit my teeth. He was led down the primrose path from education experts. He had an opportunity to make sure these numbers were accurate, and he didn’t do it. He needs to apologize.”

Doherty added that a June 2011 report, issued by the State Auditor, Stephen Eells, found that 37% of the students who signed up for the free and reduced price lunch program were actually ineligible.

“Thus, it appears that the type of fraud uncovered in Elizabeth may be rampant,” the senator said. “I urge the Attorney General to immediately expand her investigation to include all the districts in the state.  Under New Jersey’s system for funding schools, enrolling a student in the free and reduced price lunch program triggers an ‘At Risk’ designation for the student, which results in an additional $5,000-7,000 of state school aid under New Jersey’s school funding formula.  If you consider that 428,000 students are enrolled in the free and reduced price lunch program, a 37% error rate may result in a fraud totaling nearly $1 billion per year.” 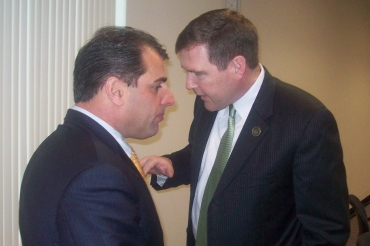