Partially redistricted into Morris County, Codey this morning marched into the Hanover Marriott with a squad of Republicans eager to publicly embrace him regardless of party.

“I think he is exercising smart politics in the way he’s conducting his campaign,” said Eames, former head of the Atlantic County Chamber of Commerce who’s challenging Codey as a Tea Party conservative.

“Other folks I talk to say they’re interested in the economy, not endorsements,” the challenger added.

In answer to a question today, Codey told reporters that while people are hurting badly, there is not much state government can do to reverse the economy – a national issue.

“The state economy is heavily impacted by what the state Legislature does,” said the candidate, who cited high taxes and regulations that impede growth.

“I just don’t comprehend lifelong legislators,” he added. “I’m simply trying to do my best to help Dick Codey retire. He’s a nice, friendly man. I admire his work on mental health. But his votes are attached to every tax we have endured.”

PolitickerNJ.com asked Eames if the establishment GOP’s bear hug of Codey might in part be driven by their fear of a Tea Party senator.

“I think originally there was trepidation and yes, the Republican Party was originally hesitant, but that’s the normal course of affairs when you see something new,” he explained. “Now the Republican Party has had time. While Senator Codey was holding his fundraiser last night at Mayfair Farms, I had my own event in Florham Park attended by  Lieutenant Governor Kim Guadagno, Senate Minority Leader Tom Kean, Assembly Minority Leader Alex DeCroce and numerous other elected officials.

“Let me be frank,” Eames added, “They will attempt to paint me as a radical. I don’t think I am. I took an oath to the Constitution in the Air Force and as a teacher. I believe in the Constitution. I believe in fiscal responsibility. I’ve seen my state decay and the loss of all kinds of opportunity due to the degree of regulation and quantity of taxes. I don’t think it’s radical to have that view, considering my son had to leave the state to find work.”

And advice from the NJGOP.

Lyon won by six votes, then a judge determined illegal campaign contributions to his campaign nullified the result. Nordstrom subsequently prevailed in a special county convention.

“It’s not the first time someone has mistakenly not completely abided by the rules of ELEC,” said Eames. “The argument that because of that, well over 20,000 votes should be thrown out, I’m uncomfortable with that. To be clear, I like Hank and Margaret.” 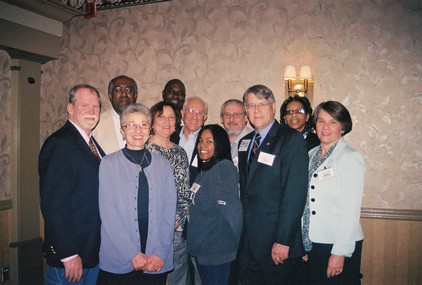