Munn, head of custodians Peter Abitanto and schools district employee Angela Lucio allegedly falsified information on applications for the Elizabeth Public Schools Free and Reduced Price School Meals Program, which led to the theft of a total of more than $7,000 in free or low-cost lunches.

Detectives of the New Jersey State Police Official Corruption North Unit arrested all three at their homes this morning.  They were processed at the State Police Newark Station and released.

“It is deeply troubling that the president of the Elizabeth School Board and the spouses of two other high-level district officials were allegedly stealing from a program intended to ensure that disadvantaged children get the nutritious lunches that they need to thrive in school,” said Dow. “We will not tolerate this type of abuse of a publicly funded assistance program by school district insiders.”

“We allege that the three individuals charged today exploited the federally subsidized school lunch program by lying about their family incomes to obtain free lunches for their children,” said Criminal Justrice Division Director Stephen Taylor. “Our investigation into fraud in this program is ongoing.”

The AG’s Office said that on five occasions from 2006 to 2011, Munn falsified information on school lunch applications which resulted in the theft of $3,946 worth of free lunches for her two children.  For example, on at least one application, Munn allegedly falsified her weekly income and omitted her husband’s salary completely.

Lastly, it is alleged that on three occasions from 2008 to 2011, Lucio falsified applications and wrongfully obtained $899 worth of free lunches for her two children.

The investigation was launched by the Division of Criminal Justice Corruption Bureau after an article in The Star-Ledger revealed that the children of officials in the Elizabeth school district were improperly participating in the federally subsidized school lunch program despite household incomes that exceeded the limits for eligibility.

“Because the charges are indictable offenses, this case is subject to presentation to a grand jury for potential indictment. The charges are merely accusations and the defendants are presumed innocent until proven guilty,” according to a release from the state AG’s Office. “Third-degree crimes carry a maximum sentence of five years in state prison and a $15,000 fine.

“Detective Lisa King of the New Jersey State Police Official Corruption North Unit and Deputy Attorney General Mark Ondris of the Division of Criminal Justice Corruption Bureau conducted and coordinated the investigation.  They were assisted by Detective Pablo Castro of the State Police Official Corruption North Unit.  The case has been assigned to Deputy Attorney General Ondris for prosecution.”

“This is the tip of the iceberg,” said Doherty, who advocates school funding reform. “I am advocating that we make this a major issue of the fall campaign. Had we taken this issue as the primary issue of the campaign, we would be going in for the kill. Certainly, there is still an opportunity to ramp this issue up.” 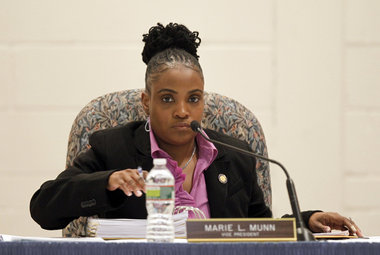