Alec Baldwin has a lot of good things going for him– he’s a great actor, the most successful sibling out of four brothers, and will one day be mayor of us all. But the one black mark on Baldwin’s card is his home life: his bitter divorce from Kim Basinger in 2002, the tabloids documenting his rocky relationship with his daughter, the subsequent custody battles that inspired him to write  A Promise to Ourselves: A Journey Through Fatherhood and Divorce. Baldwin’s 30 Rock alter-ego has a less abrasive track record with women…and Jack Donaghy dated Condoleezza Rice.

So when Alec Baldwin told “Late Show” audiences last month that he had a girlfriend named Hilaria Thomas, we were happy for him. She’s a yoga instructor! She doesn’t own a TV! She doesn’t eat meat! She’s your dream stepmom, really.

The two are very much in love, which you can tell because of their constant tweeting at each other, including pics of the actor holding puppies, putting his feet in the sand, and playing baseball. Still, you’d think that a guy who had his dirty laundry aired in public before would be more reticent to put personal love notes on a public forum like Twitter. Especially because some of these exchanges are little personal.

hilariathomas: @DiscipleOfTodd @alecbaldwin where did you go? Come to Vida! Alec, stop scaring away the students from my class!

2. Baldwin knows Spanish, but not anatomy:

alecbaldwin: Played tennis for the first time this Summer. My spine came out of my ass.

3. Either the sex is amazing or dinner sucks:

hilariathomas: olives, wine, coffee and honey… You take care of me like no one else

AlecBaldwin: @DiscipleOfTodd @hilariathomas We are going to name our sons Warrior One and Warrior Two. Our daughter: Savasana. Our dog: Downward.

5. We thought Hilaria was Spanish?:

AlecBaldwin: @DiscipleOfTodd: @AlecBaldwin what’s the most fun sin..” Tweeting in the nude. While eating corned beef. With Russian.

Of course, the weirdest part of this Twitter romance is the inclusion of @DiscipleOfTodd in nearly all of Baldwin/Thomas’ exchanges. Who is this mysterious Twitter friend, who only has 292 followers and goes by the pseudonym Harry Longabaugh. Could Baldwin be participating in a digital menage-a-trois with The Sundance Kid? 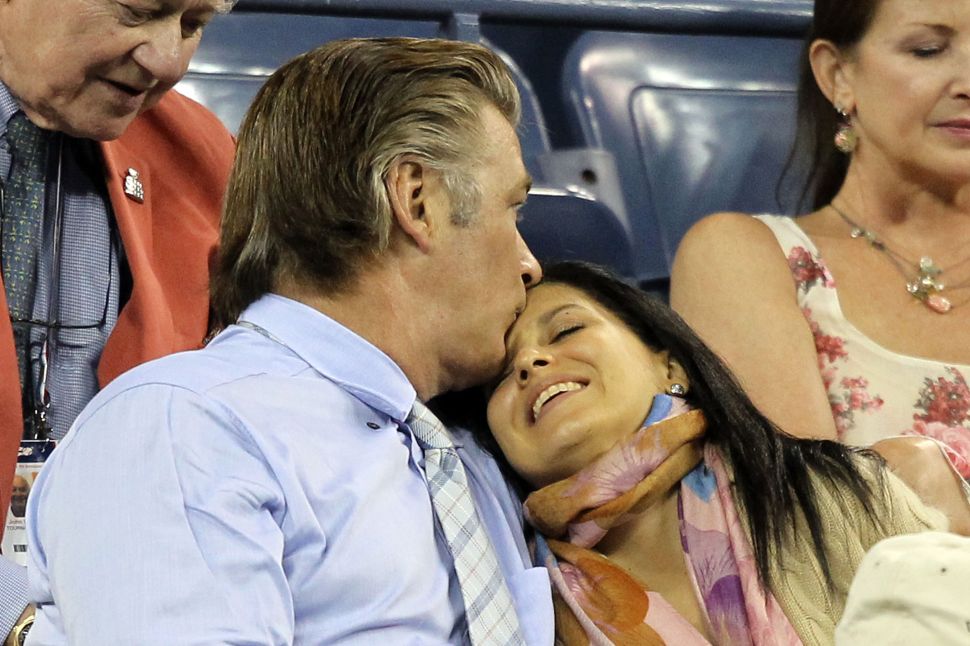