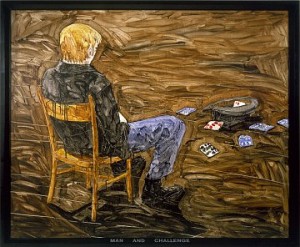 Neil Jenney, a painter popular in the 70s who has since become somewhat obscure, is now being represented by Gagosian, according to Carol Vogel at the New York Times.

Larry Gagosian had this to say to Ms. Vogel about signing the painter: “He’s been an outsider, but I’ve admired his work for years, and it’s going to be fun putting him squarely on the map where he belongs.”

Mr. Jenney, 66, has shown with Gagosian once before, back in 2001. At the time, that was his first solo exhibition in 12 years. The show was called “The Bad Years,” a pun on a phrase coined by Marcia Tucker, the founding director of the New Museum, to praise Mr. Jenney’s style: she called it “Bad Painting.”