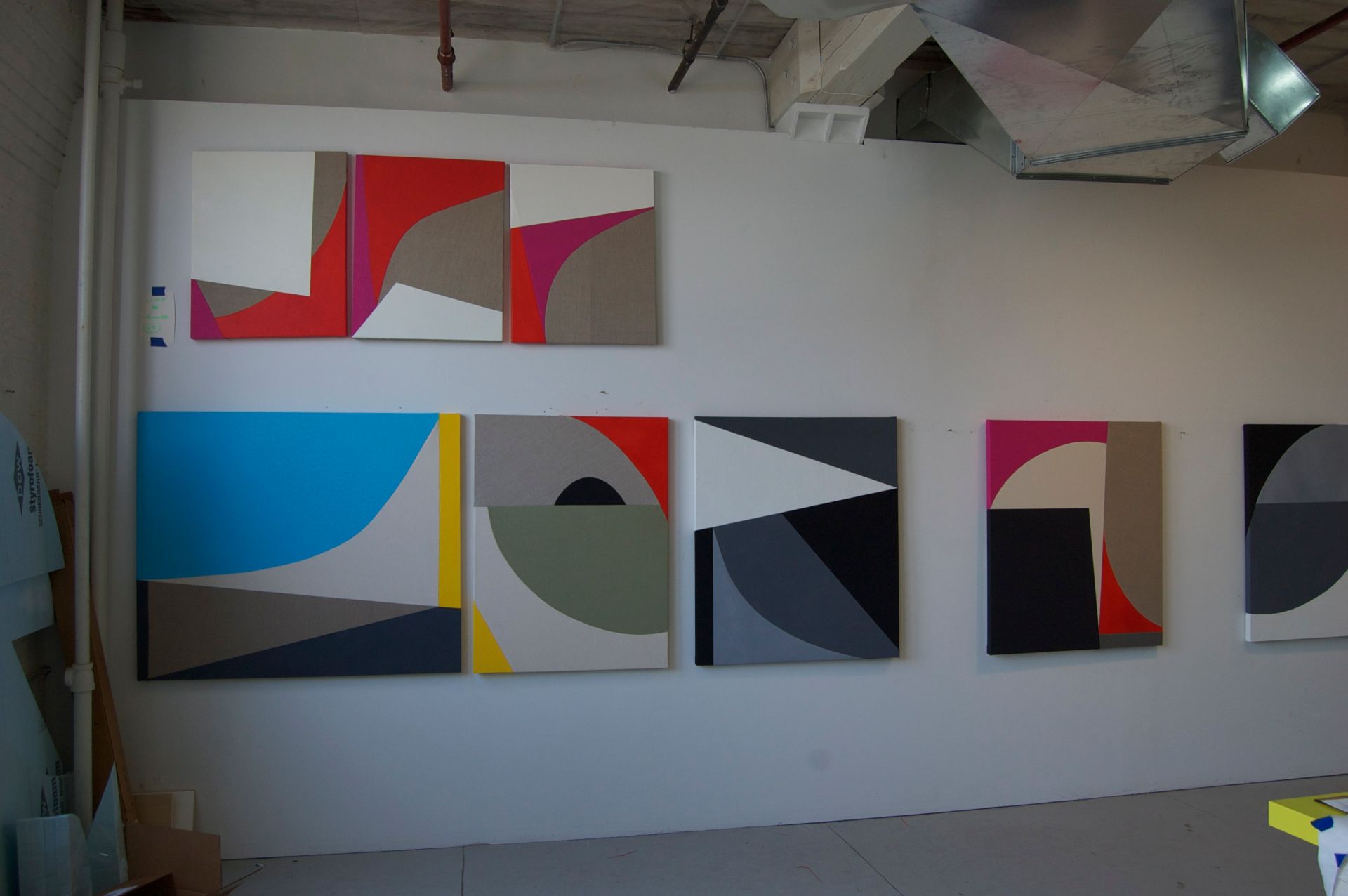 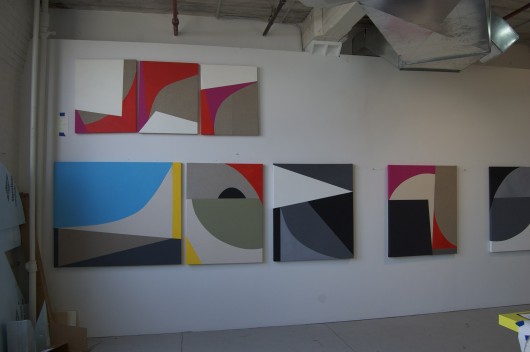 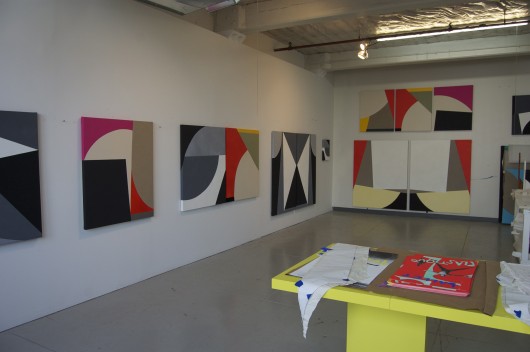 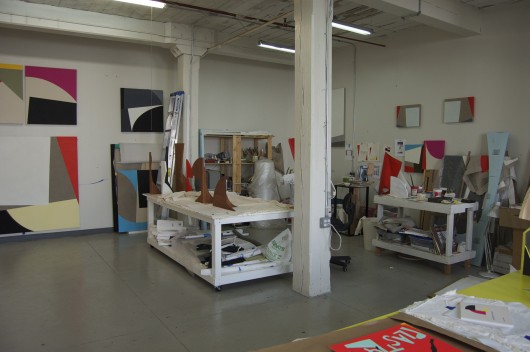 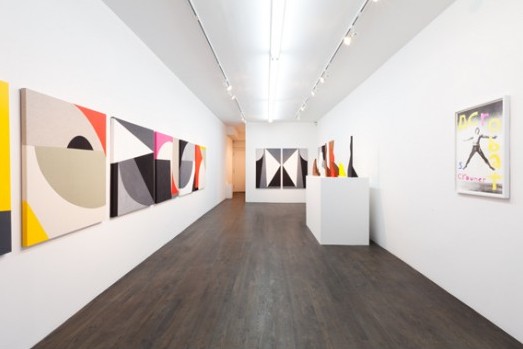 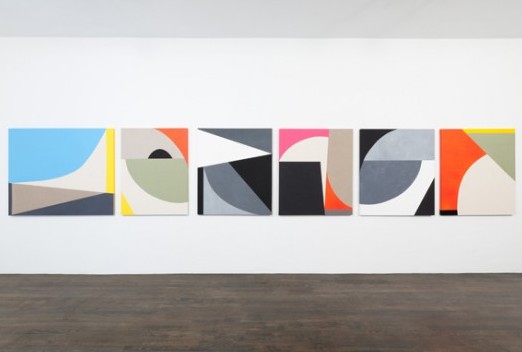 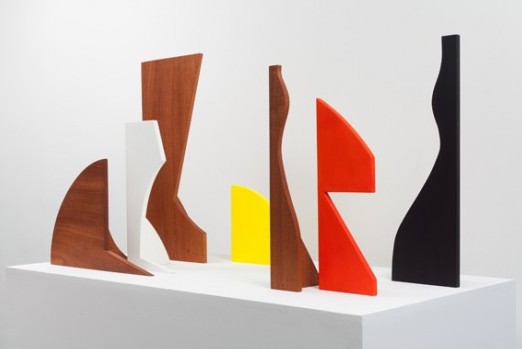 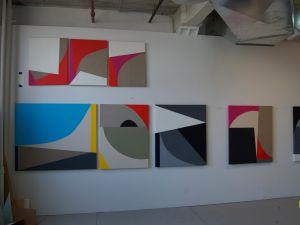 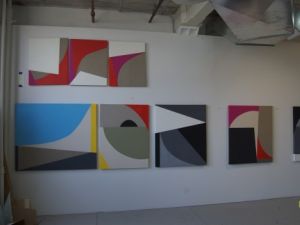 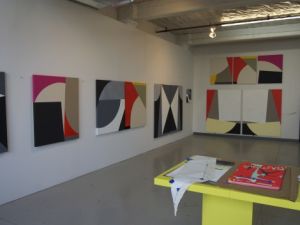 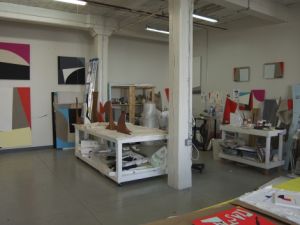 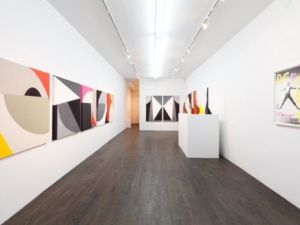 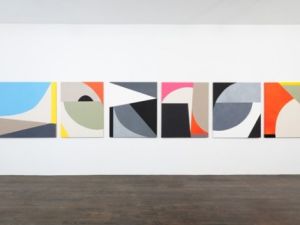 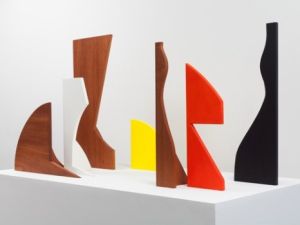 Paintings have behaved oddly this year.

At MoMA, Jutta Koether’s became props for interactive events and then morphed into sculptures; at Friedrich Petzel, pieces made jointly by Stephen Prina and Wade Guyton disappeared after only one day; and at Carriage Trade, a series of monochromes were attributed to a nonexistent artist, their origin never quite explained. And then there is the case of Sarah Crowner’s beautiful and peculiar new show at Nicelle Beauchene Gallery, on the Lower East Side.

“I like the idea that a painting can have other functions, depending on how the viewer interacts with it,” Sarah Crowner told The Observer, as she stood in her studio in the Gowanus section of Brooklyn. “A painting,” she said, “could be an environment for a performance.” She spoke quickly and seriously, as if she had thought this out and was enthusiastic about the possibilities of her choices.

It was the end of August, and the surrounding walls were lined with her abstract paintings, which were soon to be shipped off to her two September shows, at Nicelle Beauchene and Galerie Catherine Bastide in Brussels. They radiated movement, arcs and angles brushing up against one another, and were colored with luscious pinks, blues and oranges, pitched to the eye-melting spectrum of Blinky Palermo’s late works.

“I had been thinking of the forms in my paintings not only abstractly,” Ms. Crowner, 37, said, pointing to two diptychs in a corner, “but also referring to a platform, opening curtains, spotlights.” In each work, the left and right paintings were perfectly symmetrical, and with her cue, it was suddenly possible to read their squares, triangles and curves as the stage of a theater, a field readied for action. Her Brussels show actually includes a low wooden platform, turning viewers into performers.

At the same time, Ms. Crowner’s paintings themselves seem to perform. Six works, each a little more than three feet tall, hung in a line, near where we stood. “As you can see,” Ms. Crowner said, motioning along the row, from left to right, “this yellow bar bounces from one work into a triangle on another, and there’s a similar red part that continues here and here and then there.” She motioned from one painting to another to another, following the action.

“I think what’s more interesting is that a painting has to relate to what’s next to it, whether it’s another painting or a blank wall,” she said. “I’m thinking about paintings as part of relationships rather than singular entities on their own.”

In her show at Nicelle Beauchene, fittingly titled “Acrobat,” those six paintings are now arrayed across one wall, but they soon may split apart, as individual paintings are sold off into separate collections, their individual arcs and planes pointing out to those other, scattered works. During The Observer’s visit, Ms. Crowner carefully lifted one off the wall and showed us its back. It was neatly lined with stitches, which held taut the various colored planes of her work. In a single painting there were swaths of raw canvas, linen, dyed linen and painted canvas.

“Sewing made sense at first because it was a way of cutting up, collaging, reorganizing and re-constructing in a practical way,” she said. Her works are paintings, but they are also collages, fabric works and constructions–they shrug off categories, and do so well looking almost entirely effortless.

“I hadn’t really shown them in public until that show at Nicelle Beauchene,” Ms. Crowner told us of those works, referring to her first New York exhibition, in March, 2009. Ms. Beauchene had met her for the first just time a year earlier, as she was preparing to open her gallery and was making studio visits. A friend from Paul Kasmin Gallery had suggested she visit Ms. Crowner.

“She was not just appropriating, but understanding modernism as a tool to render her work,” Ms. Beauchene told The Observer, when asked about her reaction to her first visit. Ms. Crowner was taking precedents like the sewn works of Sophie Taeuber-Arp and Palermo and embarking with them to elegant new ends. “Modernism was cold and hard-edged, and she was adding hand back into this, which I really appreciated,” the gallerist said. She decided to show Ms. Crowner.

By the time of the exhibition, the recession was fully in place. “The market was slow, but we sold out the first show,” Ms. Beauchene said. Curators also took notice, and by the end of the year Ms. Crowner had been included in the White Columns Annual, curated by Miriam Katzeff and James Hoff, of the art book imprint Primary Information (which will soon produce a book with the artist), and had been tapped for the 2010 Whitney Biennial.

When we marveled to Ms. Crowner about her meteoric rise, she laughed. She has, of course, been in the art world for some time, earning her MFA from Manhattan’s Hunter College in 2002, and working as a studio assistant for artists like Rudolf Stingel, Claes Oldenburg and the art publishers Dexter Sinister, while making and showing her work.

That first show at Beauchene also included a number of rough-hewn, unglazed ceramic sculptures of pots, pitchers and cases, without bottoms, and in The New York Times, art critic Karen Rosenberg cast her as “one of many young artists to reinvigorate the medium,” comparing her pieces to those of the Italian painter Giorgio Morandi and the storied Surrealist sculptor Beatrice Wood.

“She almost uses history as a medium for her work,” Ms. Beauchene said. Indeed, Ms. Crowner created many of her previous fabric paintings based on elements of works by Brazilian Constructivist Lygia Clark and, in the case of her Whitney Biennial pieces, the Op artist Bridget Riley. In these new works, Ms. Crowner has not used any direct source material, but she has continued to eye early-20th-century modernism for inspiration.

“There was this moment when Matisse was painting sets, Sophie Taeuber-Arp was making sculptural puppets and set decorations and Fernand Leger was working with the Ballets Russes,” Ms. Crowner said. “Painters jumping into architecture, sound poetry, puppet theater; everyone mixing it up in the theater or in a gallery or on the street.” She added, “Perhaps there was, but there didn’t seem to be a sense of division or hierarchy. There was a certain freedom at this time that was inspiring.”

There are sculptures in the artist’s latest show at Beauchene, but they are wooden, instead of ceramics. Set on a platform in the gallery, they mirror many of the shapes in the paintings that hang on the wall across the space. “They’re maquettes for stage props in the same sense that the paintings are proposals for backdrops,” she said. They could, in other words, be blown up to a gigantic scale, presented in theaters behind dances or operas, channeling those early days of modern art in oblique, unexpected and refreshing ways.

We proposed that possibility to Ms. Crowner, and she smiled. “That would be a perfect—I won’t say ending—but a great extension to the project,” she said.