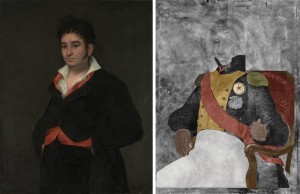 A portrait by Goya was found beneath another of the artist’s paintings, Portrait of Ramón Satué, at the Rijksmuseum in Amsterdam, according to The Art Newspaper. It was discovered using macro x-ray fluorescence spectrometry, which sounds complicated.

The portrait features a man sitting in uniform wearing a medal that signifies “the highest level of the Royal Order.” Only 15 general were entitled to wear such a uniform and medal. More details about the painting’s discovery will appear in the October issue of Burlington magazine, according to The Art Newspaper.

Next time your wondering where your lost Goya ran off too, why not try looking in the least likely place? Underneath another painting.