HIGHTSTOWN – Most of the post CNN presidential debate news coverage focused on a fight between front-running Texas Gov. Rick Perry and former Mass. Gov. Mitt Romney, but to a gathering of grassroots Ron Paul backers here Monday night, Perry and Romney might as well be the same candidate.

In an early exchange between Romney and Perry over Social Security, some of the nearly 20 Paul supporters observing the Tea Party Express debate on a big screen TV jeered at Perry as the Texas governor tried to explain what his rival tried to identify as a Perry reversal on his Social Security position.

“We’re having a conversation,” said Perry as he completed an answer by ducking Romney’s direct question on whether he still believes that Social Security ought to be given to the states.

“We’re having that conversation,” Romney pressed. “We’re running for president.”

The bigger roar of approval came when former House Speaker Newt Gingrich, (R-Ga.), said President Barack Obama “scares them every single day,” a prelude to the kinds of cheers the group would lay down all night for Paul.

“We know we’re competing with Monday Night Football,” said organizer Neil Schloss, who hosted the debate-watching party in his downtown accounting office. “But we’re trying to get people to know what’s going on. We know the country is broken.”

Running third in some national polls behind Romney and Perry, Paul throughout the night referenced his opposition to American adventurism, and cited the country’s involvement in foreign wars as one of the key reasons why America is in financial crisis. He also noted domestic programs as partly to blame. When he called for the dismantling of the federal Department of Education and the Department of Energy, he triggered large roars of approval here in the audience.

At one point, Paul went after Perry, the governor of his home state, who he said raised taxes.

“I don’t want to offend the governor,” said Paul. “He might raise my taxes or something.”

When CNN moderator Wolf Blitzer questioned Perry on his support for the HPV mandate and Perry said, “Texas is a place that protects life,” at least one Paul supporter gaped, ‘Duh.”

If the roomful of Paul supporters observed Romney and Perry with little excitement and mild disdain, there was some rancorous reception of former U.S. Sen. Rick Santorum, (R-Pa.), cited as a “chicken hawk” by one man in the room in a Bound Brook firefighter T-shirt.

Nearly every time Santorum spoke, cackles of reproach ensued. The crack he made about the economy needing drastic improvement to be a disaster met with silence.

“There’s a difference between military spending and defense spending,” said Paul, who moments later met the horns of a charging Santorum, who criticized the congressman for trying to suggest that America perpetrated Sept. 11, 2001 with its foreign policy.

“We were attacked because we have a civilization antithetical to jihadists,” said the former senator.

Celebrating Paul’s rejoinder in the aftermath of boos directed at Santorum, a self-identified former sailor sitting in the crowd said he got tired when he was in the military traveling around the world serving as the policeman for an elite circle of international bankers, in roughly his words.

When PolitickerNJ.com asked the room post-debate if anyone, if it came down to it, would support Perry or Romney, only one hand appeared, feebly.

Another said, “The main candidates are all pro-government, kind of the way they were back in my home country of China, but not Paul.” 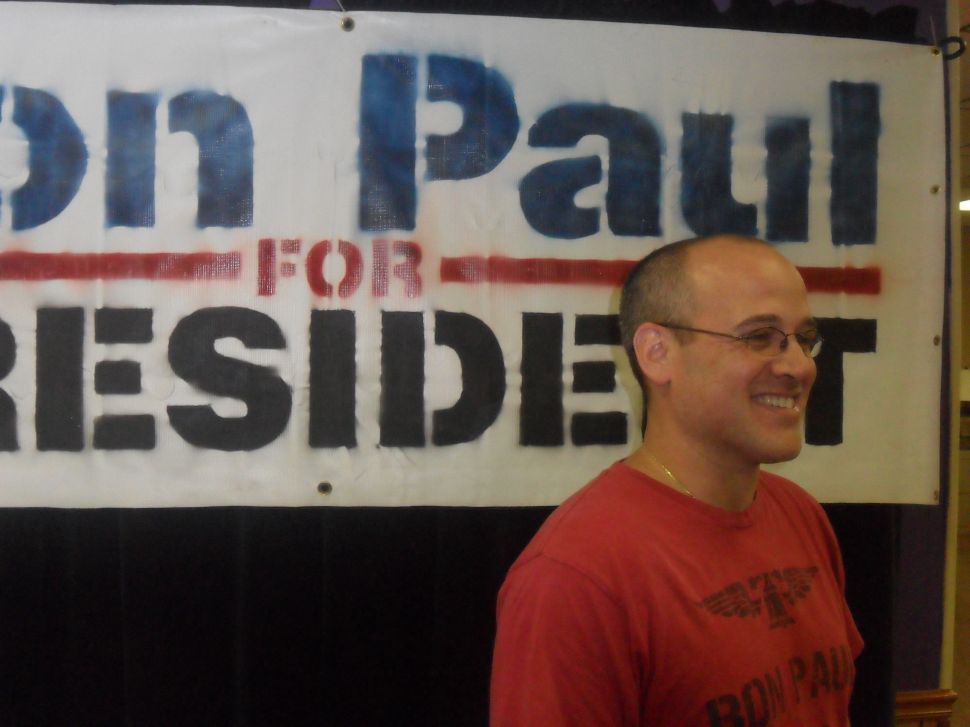