CAMDEN – No one would accuse the first Congressional Redistricting Commission hearing – held in the Gordon Theater of the Fine Arts complex of Rutgers University – of being better than “Cats.”

“Welcome to this capacious theater,” said 13th member John Farmer, sitting beween six Democrats and six Republicans on a commission that has the responsibility of drawing a congressional map for the next ten years in an otherwise mostly empty space.

What’s at stake here in a state that has lost population relative to other states is the loss of a congressman – a private agony for at least several members of Congress that evidently contains little tragic theatrical intrigue for a public that stayed clear of the hearing.

At least one expert said nothing rose out of today’s half-hour event other than the obvious, which is that congresspeople don’t want to go on the record as neogiating plays out off the radar.

Mayor David Mayer of Gloucester Township backed up the point.

“I would ask the residents to take into consideration continuity of communites,” said the mayor, going to Rosenthal’s logic in ultimately preserving a map favoring an existing legislative majority for Democrats.

Operatives sunk in gray flip chairs in the shadows toyed with BlackBerries during the mostly pro forma event dominated by Norcross-allied testifiers.

“It’s my hope the dean’s vote will not be needed – that the commission members come together,” said State Democratic Party Chairman John Wisniewski.

“Districts must be compact,” added the chairman, echoing Redd’s checklist.

Citing early what might prove to be a thorny subject, Monmouth University political scientist/pollster Patrick Murray urged transparency  – mostly for the sake of public understanding of how the commission is using the relevant terms of art.

“We have one of the least compact maps in the country,” Murray said. “If your constituency runs (from coast to coast) that in of itself presents a challenge to members of Congress, to have them wind this snaky structure of a district – and more difficult for the voters.”

Murray urged the commission to publicly publish standards they will use to define compactness and communities of interests.

Failing hard mathematical definitions, terms like continuity are meaningless, said Murray, shortly after Farmer gaveled out the untheatrical session in the Camden theater. 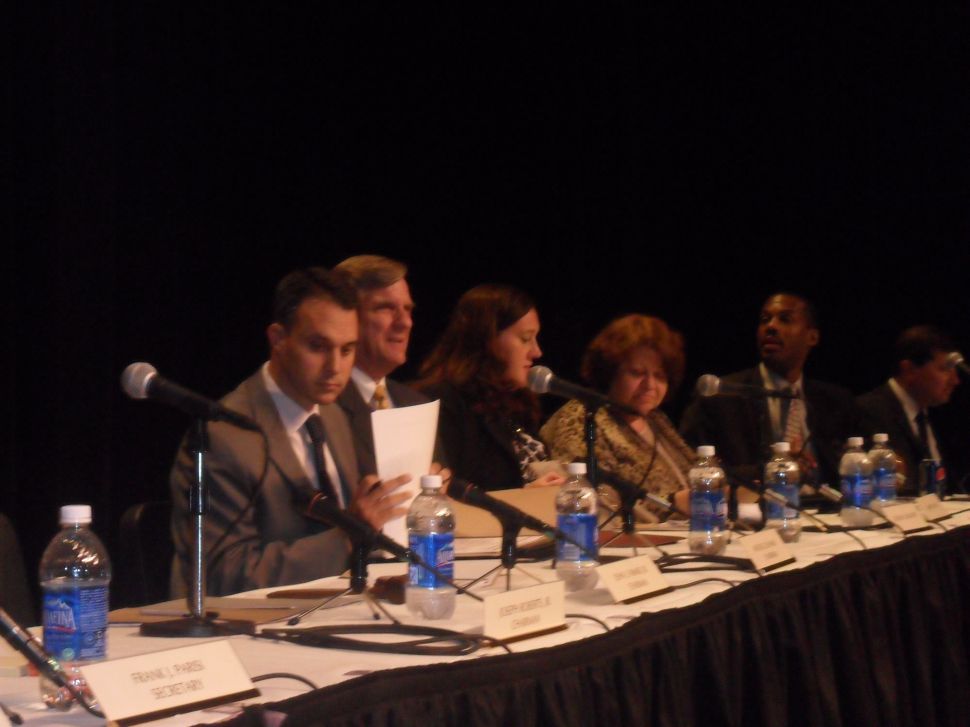