NEWARK – There is an eight mile stretch in Newark where nearly 80 percent of all shootings take place, said Mayor Cory Booker today. This is the hot spot.

Standing with the mayor, U.S. Sen. Frank Lautenberg announced a three-year, $2.19 million federal grant to put four cops on the streets there and – more importantly to Booker – to install innovative and proactive policing programs.

The city is going to initiate contact with a cross-section of the more than 2,600 gang members across the city, Booker said, and try to stem the tide of crime midstream. “We cannot arrest our way out of this problem,” he said, suggesting instead to “empower people to ensure that crime does not happen in the first place.”

“If you’re leaving prison, you’re more likely to go back to prison than not,” Booker said. “It is a carnage of human potential.”

The new program will be part of the office of prisoner re-entry, created in 2006, which Booker said has successfully transitioned 70 percent of their individual cases into productive jobs over the past year.

“We need to start going out to that population…giving these folks jobs, giving them education pathways…This is really what we are all about.” Not only is recidivism a problem, he said, criminal convicts represent 84 percent of all violent crime victims.

Booker recalled a moment in the middle of the summer killing spree on the Brick City streets where “we feel the fear gripping our city.” New police director Sam DiMaio called an emergency meeting with representatives of the U.S Attorney’s Office, Federal Bureau of Investigation, U.S. Marshals, State Police, and other law enforcement agencies. “We had over 100 people in the room,” he said, representing millions of dollars in taxpayer money – all staring up at 30 familiar gang member faces on a screen, would-be criminals that the million-dollar professionals cannot stop. “Talk about big government?”

The mayor realized: “(We are) pouring more and more money into the same tired, old practices…while the same group of guys can bring terror to our city.”

“The majority of them out there are just trapped,” he said, buying into the “economic decision” to sell drugs. “They know what this job market doesn’t offer them.”

“This is a far more inexpensive way (to fight crime),” he said.

Lautenberg said it defeats the myth that Democrats are only interested in the most expensive way to do things.

On the reduction of police forces in urban areas like Newark, he said lawmakers are acting in a “heartless” manner by taking police off the streets. “That’s what Gov. (Chris) Christie has done,” Lautenberg said, driving home some political points at the press conference. “House Republicans have zeroed out funding like this…(because they’d) rather have cops walking the unemployment line, rather than walking the beat.”

The “innovative” programs, Booker said, are better than cops on the street: they defeat crime before there is a victim and a criminal. Given the choice, he said, to hire back 10 police officers with the funding, or to hire back four officers and install the new programs, he said he’d take the latter.

“(It’s) far cheaper to case manage,” he said, “than spending ungodly resources chasing after them and arresting them.” 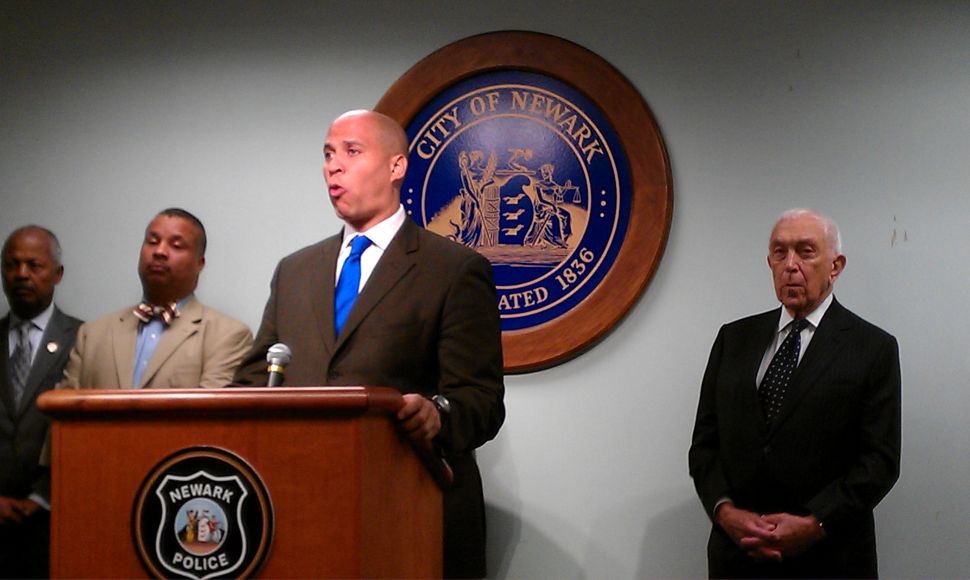