(This page is not all-inclusive and will be updated as events occur. Have a suggestion? Leave it in the comments!)

Though Occupy Wall Street is not an organization and its key figures have avoided adopting an hierarchical structure, it is being loosely orchestrated by an ad hoc coalition of groups.

Adbusters: The magazine that kicked it all off. Although the magazine (published out of Canada) has mostly handed off the reins to OccupyWallStreet.org, it still chimes in with daily updates and orientation guides.

Credo: “Inspired by the Egyptian Tahrir Square uprising and the Spanish acampadas, we vow to end the monied corruption of our democracy.”

They have a lot of demands for the President and corporate America, and refuse to pare them down.

New York City’s General Assembly: Created August 2, this freeform consortium acts as de facto decision-makers for the protesters. The group, which includes anyone who wishes to attend, works in a horizontal, or “hyper-democratic” fashion: no one individual is bound by the group’s decision, consensus is reached when no one objects to a decision, and everything takes forever to get decided, because everyone is allowed a chance to speak. But in the end, a majority vote determines a given course of action.

According to the New York Observer‘s Adrianne Jeffries:

There are three key components to the meetings: the “human microphone,” in which the people closest to the speaker repeat his or her words in unison for the rest of the crowd; the “stack taker,” who manages the list of people who want to speak; and a set of hand signals that include “spirit fingers” to indicate assent and arms crossed in an X to indicate a question or objection.

The General Assembly has not adopted a slogan or central issue but is “building the capacity to constitute ourselves in public as autonomous collective forces within and against the constant crises of our times.” Here are General Assembly’s Principles of Solidarity. Anonymous: “Those  guys with the Guy Fawkes masks,” basically. Anonymous is the civil disobedience group that first got attention by going up against the entire Scientology organization in 2008’s Project Chanology. It was one of the first groups to sign on to the Occupy Wall Street cause as well, joining sometime in August according to  The Nation. These are the “hacktivists” that created a Twitter tool called Urge to trend up messages calling for a peaceful protest. After Deputy Inspector Anthony Bologna was identified (via a blown up photograph), they tracked down his personal information (also known as “doxxing”) and sent the evidence to Gawker.

Anonymous does most of its activism/damage through the Internet, so its hard to pinpoint any one person who actually belongs to the group. However, two “former members” are currently writing a book on Anonymous. Most protesters do not want to be associated with Anonymous, for a myriad of reasons. (Including the Fight Club-y credo that once you identify yourself as Anonymous, you are no longer Anonymous.) So their presence is often referenced at the protests by people wearing masks, but those people may or may not really be Anonymous. Get it?

What they are protesting: What have you got?

US Day of Rage: Another early sign-on, this group was originally spearheaded on the Internet by IT designer ﻿Alexis O’Brien with the goal of assembling protesters via Twitter hashtag #USDOR. They, at least, have a mission statement and a list of demands:

We demand that Citizens United versus FEC which deems corporations to be people when it come to political contributions be overturned.

We demand that corporate personhood be abolished.

We demand state and federal election and campaign finance laws be reformed.

We Are the 99 Percent


Some of the key players:

Nathan Schneider: editor of WagingNonviolence.org. He’s working on the media side of the protests and wrote the F.A.Q. on the protests for The Nation.

Patrick Bruner: Working in the public relations team at the protests.

Hero: Another P.R. team member for Occupy Wall Street. The media team can be reached at press@occupywallst.org.

Wylie Stecklow: Lawyer whose firm was hired by General Assembly. His counsel is around to offer legal advice to the protesters. 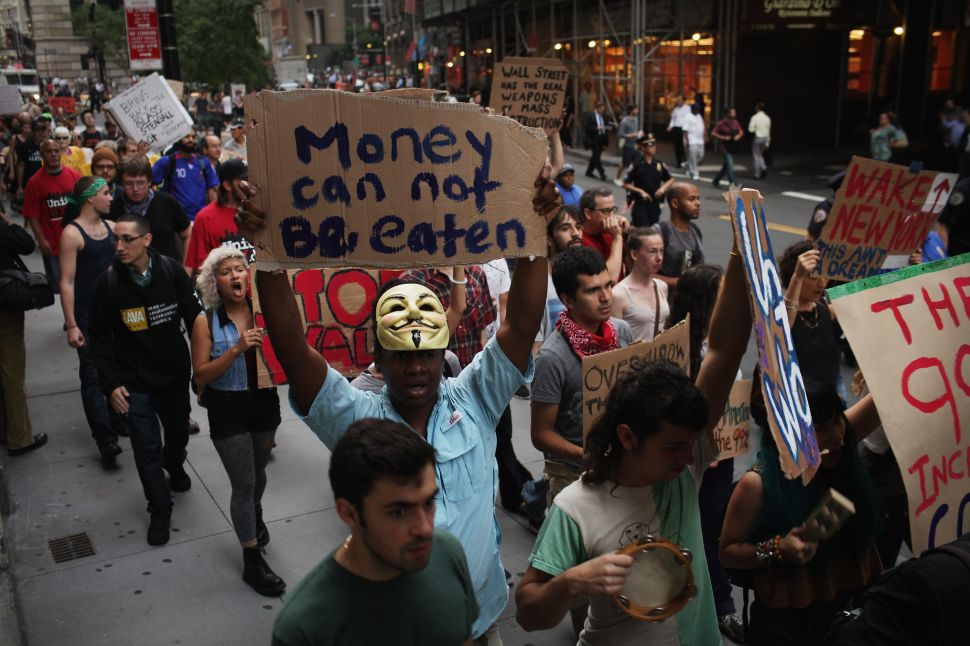