TRENTON – The long-shot Democratic challenger of state Sen. Mike Doherty (R-23), Oxford, slapped at the incumbent Republican today from the sidelines of a Ron Paul rally outside the Statehouse Annex.

Democrat John Graf said that in endorsing a candidate for president who said the Federal Emergency Management Agency (FEMA) shouldn’t exist, Doherty is out of touch with a flood-ravaged district.

“That’s too extreme for New Jersey and it’s too extreme for the 23rd District,” said the former Republican from Bedminster, who attended the Doherty-Paul rally with his running mate, Bound Brook Democratic Party Chair Karen Carroll.

“This is an incumbent who is running for the U.S. Senate, not state Senate,” said Graf. “That’s what this is about today. He’s climbing the political ladder during a catastrophe (Hurricane Irene).”

The challenger also objected to Doherty’s exhortation that America “bring the boys home” from overseas wars.

“How about our women service members,” wondered Graf.

Doherty shrugged off the criticism.

“Men and women,” he said when asked about his wording by PolitickerNJ.com

He parried Graf’s other complaints.

“I’m in the district all the time discussing my schools funding reform, which goes to the heart of our singular most important issue: property taxes,” said the GOP senator. “I was just in Bedminster and Bridgewater giving my presentation – those are towns in the district. This weekend I participated in the John Basilone Parade in Raritan. Certainly, I am focused on my re-election bid.”

Doherty said maybe Graf – and Carroll, who also jabbed at the lawmaker – don’t understand Paul’s reading of the Constitution.

“What Dr. Paul is saying is flood management is a task better left up to the states than the federal government,” Doherty said. 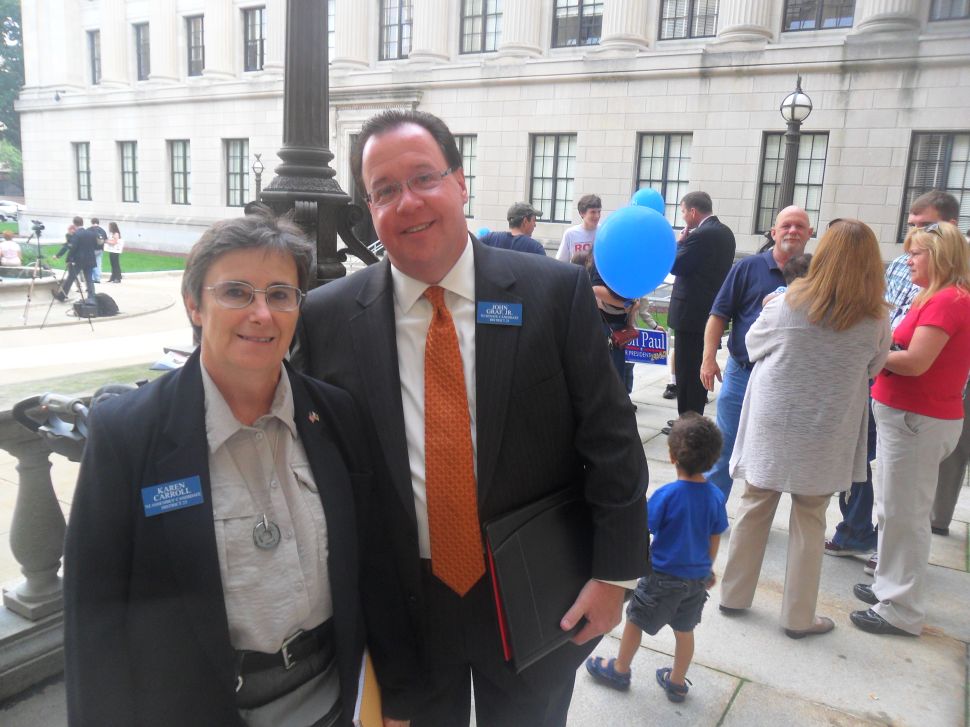