Amid speculation that today’s decision by the Third Circuit Court removing him from the ballot for state Senate could mean a run for Assembly, former Olympian Carl Lewis said today it’s not even on the table.

In a Tweet posted to his feed, Lewis said the 8th District already has two excellent candidates for Assembly.

“Just to clarify no one has spoken to me about running for Assembly. It is off the table. Dems have two great candidates who can win,” Lewis wrote.

The Assembly has only a two-year residency requirement as opposed to the Senate’s four-year requirement that has tripped Lewis up.  Sources have told PolitickerNJ that there has been speculation that Lewis would end up on the Assembly ballot should the court rule against him.  To get on the Assembly ballot Lewis would need a majority of county committee members to approve the change and then permission from the Superior Court because the ballot deadline has passed.

Lewis, a Democrat, has been vying to challenge Republican Dawn Addiego in the GOP-heavy district.  Various courts have ruled both for and against Lewis in the battle over his residency.  At issue has been Lewis’ vote in a 2009 election in California, which Republicans contend means he had to have been a resident of that state as late as two years ago.  Lewis has owned a home in New Jersey for four years, which Democrats point to as proof of his residency here.

The Democrats are running Lumberton Councilwoman Anita Lovely and Waterford Committeewoman Pam Finnerty for Assembly in the district.  The two replaced Sharyn Pertnoy-Schmidt of Evesham and Ray Storck of Westampton, who were described by sources as placeholders.

On the GOP ticket, Addiego is running alongside incumbent Assemblyman Scott Rudder.  Burlington County Freeholder Chris Brown is running for the seat vacated during the summer by Pat Delany, who stepped down after his wife sent a racially charged email to the Lewis camp. 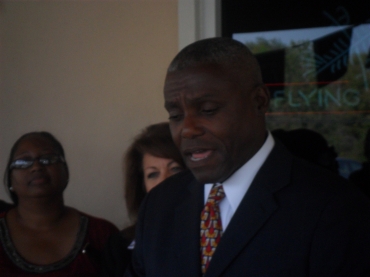