The markets reacted to Google’s acquisition of venerable guide brand Zagat, pushing Open Table’s stock price down eight percent. The move is based on the assumption that Google is trying to get closer to the action in terms of reviews, reservations and someday payments.

Google has been on a shopping spree Since Larry Page took the reigns as CEO and shows no signs of slowing down. According to recent reports the search giant is willing to pay far more for Hulu than the other bidders involved to overcome any reservations the TV networks might have about selling to an online advertising powerhouse.

In recent moths Betabeat has covered the departure of several high profile staffers from Zagat to startup land, including its chief revenue officer and head of mobile. No doubt the atmosphere at WeWork Labs is exciting, although something tells us the staff cafe doesn’t quite match up to the Googleplex. As for Tim and Nina Zagat, who started the company 30 years ago as a guide to New York eateries, this is a massive and well deserved win. 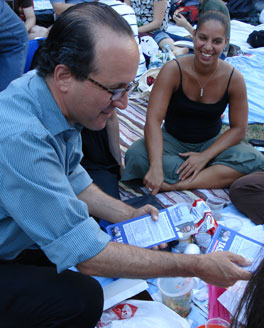