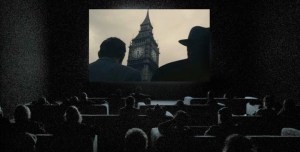 Still from "The Clock" by Christian Marclay.

The Museum of Modern Art has acquired Christian Marclay’s 24-hour ode to cinema, The Clock, according to a press release. The Clock, which debuted in New York last winter after a hugely successful run at London’s White Cube, came in an edition of six. Each one has either already sold to a major museum, or is in the contracting process, according to Paula Cooper Gallery, which represents Mr. Marclay in New York.

The Clock is a 24-hour montage in real time, constructed out of thousands of excerpts from cinematic history that express the passing of time. In other words, when a clock says 4:00pm in the film (Robert Redford hitting a home-run and shattering a scoreboard clock in The Natural), it is 4:00pm Eastern Standard Time in real life. The piece was celebrated by critics and audiences, who lined up in the cold to watch the film, many of them staying for several hours.

“With his magnum opus The Clock, Marclay highlights the virtuosity of sampling and remixing as contemporary methods that underline the importance of editing as a highly creative process,” Sabine Breitwieser, chief curator of media and performance at MoMA, said in a statement.

MoMA will announce its plans to exhibit The Clock at a later date. These things take time.