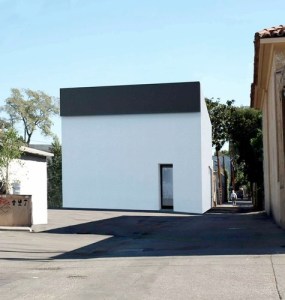 A rendering of the future Matthew Marks Gallery in West Hollywood with a facade embellished by Ellsworth Kelly. VIA NEW YORK TIMES

At last! After a long wait we finally know the details of veteran New York art dealer Matthew Marks’ plans for a Los Angeles branch. For almost two years the news has been simmering away on the art world’s back burner, with no word from the Marks camp as to exact dates. We heard West Hollywood and — well, that was about the extent of it. We heard something about West Hollywood. And now, with the Art Platform fair opening in Los Angeles today, as well as all the “Pacific Standard Time” business — for those of you who have been living on the moon, that is a very very large exhibition devoted to California art — Mr. Marks has spoken. And in an unexpected venue, The New York Times.

Let’s dispense with a few things before we get to what’s interesting about this. During last November’s New York auctions, when, as previously mentioned, the news of Mr. Marks’ upcoming LA venture was simmering on the back burner (not a great metaphor, but it is early, and we are a bit logy) we received a press release that said that Larry Gagosian, who has operated a Los Angeles gallery since 1995 — well, really since 1979, with a little break in the late 80s and early 90s — had just signed Andreas Gursky, a longtime Marks artist and one of the most important (for which read, in part, priciest) artists in the world who works with photography. (It is important not to call such practitioners “photographers” anymore.) When we received this press release, we supposed that anyone could have seen the writing on the wall when Mr. Gursky did an exhibition at Mr. Gagosian’s newly expanded Beverly Hills space in March of 2010 with the usual star studded, Oscars-timed opening and dinner, and —

Wait a minute we are burying the lead here. What we mean to say is, Mr. Marks has announced his plans for his Los Angeles gallery and from the looks of it they more than make up for the wait, and the Gurskylessness. The artist Ellsworth Kelly — yes, Ellsworth Kelly, a longtime Marks artist and, at 88, one of the living legends of American abstract painting — will make a painting for the building, a black rectangular painting that floats along the top margin of the facade of a 3,000 square foot building on North Orange Grove Avenue in (yes! it was true!) West Hollywood that, as Mr. Kelly described it to the Times‘ Carol Vogel, looks “all white like a saltbox.” The saltbox is set to open in January.

Mr. Marks said to Ms. Vogel: “…I imagine people walking down the street will not know what it is, at least not at first, but I hope they will take a second look and realize that it’s something special.” Judging by the image, it certainly is something special. But what does it look like if not a gallery? One of Mr. Kelly’s comments to the Times got us thinking. He said: “At first I thought of creating a pin, like something a woman would put on her dress.” We think the building still has the aspect of something a woman might wear — it looks a bit like a pale lady outfitted in a black pillbox hat. Perhaps a pale lady who is facing down, and whose black pillbox hat has slid to the back of her head, the door being the narrow slit of her eye. Then again, looking at the building, we also thought of Mr. Kelly’s painting as an em dash hovering between the two neighboring buildings–a break in thought, a crucial interpolation. (Come to think of it, that’s not a bad metaphor for a gallery: the interpolation of art into the workaday text of our lives.)

Suffice it to say,  we see many poetic possibilities in Mr. Marks’ facade, and look forward to visiting his new Los Angeles space.