Another reason for the Michael’s-dining, Bergdorf Goodman window-shoppers of Fifth Avenue to hate the homeless: they are actually rich, college-going liars in disguise. Thank goodness for New York Social Diary’s David Patrick Columbia, who took it upon himself to investigate the curious case of a panhandling young lady who has claimed for nine months now to be seven months pregnant.

Sorry, did we say investigate? We meant  “snapped some photos as he was walking by” before speculating on a trend story about a new “fashion” (wrong word but right idea) among some young people—including college students well housed in dorms and apartments here in downtown Manhattan—who did this panhandling/begging as a kind of lark.”  (The logic here is that this lady is a hipster in disguise, and not, as one might assume, just a pregnant, homeless person who hasn’t gotten around to updating their sign yet.)

Evidence of this prince/pauper trend Columbia asserts in his post—which then seamlessly (not seamlessly) transitions into party coverage of Hilary and Wilbur Ross’ penthouse event to address real poverty and honor Citigroup’s Vikram Pandit—includes readers sending in photos of young panhandlers with “new” looking sneakers and expensive glasses frames. Also, the guys are way too clean-shaven to actually be homeless. Hipsters are the worst, right??

The issue is that Columbia and the rest of the upper crust just care too much, allowing these young con artists to make marks of  “us who empathize” with the plight of the actual poor-poor. (Empathy now defined not by how much money you give, but how many photos  you can snap at the homeless with your iPhone before heading to penthouse events honoring bank CEOs).

Maybe David should go back down to Bergdorf’s and confront the faux-pregnant woman, Michael Moore-style, demanding that she expose herself as the NYU student she actually is. Then he could make her donate all her panhandling proceedings to Accion International, c/o Pandit and the Ross family.

God, the nerve of the nouveau-riche poor. 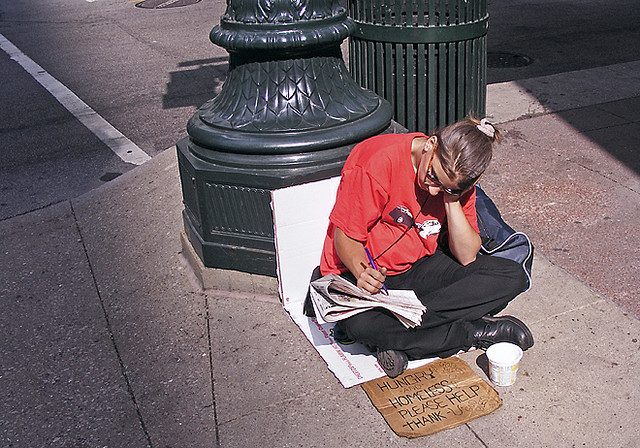