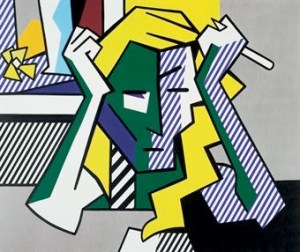 There’s been a lot of talk in the press lately about women working in art galleries. First came Gagosiennes, a magisterial account, in the October issue of Vogue, of the many, many women in the employment of global megadealer Larry Gagosian. Next up, New York magazine’s fashion blog, The Cut, made a trip to Chelsea, and photographed gallerinas and gallery directors, including close-up shots of select items of clothing, shoes, handbags, etc. (“Seeing them behind their imposing front desks or gliding gracefully from room to room with collectors,” The Cut observed, “you could be forgiven for sometimes enjoying these “gallerinas,” more than the art on display.” Hm.) And, finally, the New Yorker, in an article by Mindy Kaling about women’s movie personas that do not exist in real life, gave us “The Woman Who Works in an Art Gallery.”

In Ms. Kaling’s article, there first come “The Klutz,” “The Ethereal Weirdo,” “The Woman Who Is Obsessed with Her Career and Is No Fun at All,” “The Forty-two-Year-Old Mother of the Thirty-Year-Old Male Lead,” “The Sassy Best Friend,” and “The Skinny Woman Who Is Beautiful and Toned but Also Gluttonous and Disgusting” – up to this point, we were very much on board with this article! These absolutely are big-screen stereotypes that don’t exist in the real world. (We say this as a Woman Who Is Obsessed With Her Career And Is, She Thinks, Still A Lot of Fun, At Least Sometimes.) But then came the final category: “The Woman Who Works in an Art Gallery”: “How many freakin’ art galleries are out there?” Ms. Kaling writes.

Are people buying visual art on a daily basis? This posh/smart/classy profession is a favorite in movies. It’s in the same realm as kindergarten teacher or children’s-book illustrator in terms of accessibility: guys don’t really get it, but it is likable and nonthreatening.

Art Gallery Woman: “Dust off the Warhol. You know, that Campbell’s Soup one in the crazy color! We have an important buyer coming into town, and this is a really big deal for my career. I have no time for this!”

Galleries are everywhere, and women work in them, and, if the Gagosiennes article is to be believed, these women stand to make several million dollars a year doing so. Therefore the New Yorker’s characterization, meant to be satirical, may be more on-the-money than it thinks it is: these women are tough. Which is to say, if there does happen to be dust on the Warhol, they will want the Warhol dusted, stat. What’s wrong with that, exactly? Yes, important buyers exist. They come to town. They buy Warhols for $10 million. All in a day’s work for the women of the art gallery system.

Now let’s debunk a few things: contrary to what The Cut will have you believe—and what the Gagosiennes photo spread will have you believe, with Gagosian’s women arrayed in the gallery, beneath a Calder mobile, like a zombified Vanessa Beecroft performance, all of them coolly decked out in gowns by the likes of Oscar de la Renta and Valentino — these women of the gallery world aren’t merely clothes horses who show up and look smashing next to a Cy Twombly, making the Twombly even more, let’s say, desirable by proxy.

Here is a story from that time: Sometimes The Observer would come to the gallery after classes and do some work – stick slide labels onto slides of artists’ work, deal with correspondence, whatever – with just a lamp on in the office, and the gallery and its art mostly in the dark. One evening The Observer lost track of time, because we were working not on gallery stuff, but on a paper about Romanesque art, and we’d hit a block. The next sentence of the essay would not come together. It dumbly refused. We felt doomed, as one does when one can’t write, when one begins to believe, most grimly, that one has altogether lost whatever command of language one once had. We stood up from the computer. We paced around in the dark. We lay down on our back in the center of the gallery, in silence, and stared at the ceiling, and brooded.

And then: the phone rang. This was before cell phones, and we figured it could only be our roommate, checking in on us, and so when we answered the phone we did not answer, with alacrity, as we usually did, being a gallerina, “Hello, Gallery X!” Instead, we said, tentatively, “Hello?” There was a pause, and then the caller said the caller was X, a Famous Art Critic. [We’re redacting names here, because we don’t think they matter so much to this story.] Famous Art Critic X was just calling to leave a message so that a press release could be faxed over in the morning. Famous Art Critic X did not expect anyone to answer the phone at two in the morning. Both Famous Art Critic X and The Observer were therefore uncomfortable. The Observer took the message and hung up the phone, and then went and sent the fax, and then something occurred to us: Famous Art Critic X was, presumably, up writing. So were we! We felt a sense of solidarity, and we felt – dare we say it – inspired, and we sat down at the computer and pounded out our essay on Romanesque art, and walked out an hour later onto Soho’s depopulated streets knowing beyond any doubt that we wanted to be a writer, and not an art dealer.

But we never would have discovered that, if we hadn’t been a woman who worked in an art gallery.