The crowd at New Yorker art critic Peter Schjeldahl’s Fourth of July fireworks display tends to be a little bohemian for the region.

Dewy-eyed attendees from the art world who have trekked up to his 120-acre home in the Catskills describe the fireworks as “a volcano,” “elaborate choreography,” “magic,” “like watching a battle in the woods during the Revolutionary War,” “sublime,” “really dramatic,” “a rainstorm in reverse,” “like that scene in Apocalypse Now where they visit the U.S.O. show with the Playboy bunnies” and “spermlike.” (One year. Had to be there, apparently.)

“It’s basically like if you’re riding the Cyclone with somebody shooting fireworks at you,” Adam Horovitz told The Observer. “It’s just wild.”

Earlier this year, Mr. Horovitz, known to most as Ad-Rock of the Beastie Boys, began work on a documentary about the fireworks and plans to have a cut of the film ready in time for next year’s Fourth, with an eye toward an eventual wide release in theaters. The documentary marks his first foray into film and chronicles the fireworks show itself, as well as the mythos surrounding it.

The 22-year-old party in Bovina, N.Y., has attracted between 600 and 1,000 people in recent years, depending on the weather forecast. (Mr. Schjeldahl has never been deterred by rain.) Mr. Horovitz learned about the event from the writer Ada Calhoun, Mr. Schjeldahl’s daughter and a friend who plays on Mr. Horovitz’s softball team.

“It’s not a movie about fireworks because how much fireworks can you really watch, you know?” Mr. Horovitz said. “It’s about obsession, in a way.”

Though his own father, the playwright Israel Horovitz, ran in the same circles as Mr. Schjeldahl in the Greenwich Village of the 1970s, they apparently didn’t cross paths often. Still, Horovitz père would fit right in at the fireworks. The open invitation attracts the kind of crowd you might find at any downtown gallery opening, plus, in recent years, a slightly glitzier element. Artists like Yoko Ono, Brice Marden, Jim Torok and John Currin and his wife, Rachel Feinstein, have all been spotted there, as has Heather Hubbs, director of the New Art Dealers Alliance (NADA) and curator Ann Temkin of MoMA. There are always plenty of journalists—Roger Angell is a longtime attendee—and even celebrities, including Alan Cumming, Steve Martin and Ben Stiller.

“There were many faces that I recognized and many that I didn’t,” said Gary Tinterow, Nineteenth Century, Modern and Contemporary Curator at the Met, who attended the event for the first time this year. “Clearly there were people from the local community and that was marvelous, from fire captains to local residents to farmers and people engaged in regular country life, and the New York art-world-types, curators, critics, dealers and lots of young artists I presumed to be from Brooklyn because they had facial hair. It was great to see all these different aspects of Peter’s life represented in human form at his party.”

The carefully choreographed display begins with Mr. Schjeldahl only barely visible in the darkness at the front of the woods, as his basso friend Tom Groves leads the crowd in “The Star-Spangled Banner.” Then, a handful of giant globular lanterns ignite and float into the sky, off into the Catskill Mountains. The show proper then erupts with three planes of fireworks, the first hand-fired by a group of volunteers stationed on one side of a stream. Beyond them, in a meadow on the other side of the stream, are clustered “cakes” of fireworks, now electronically wired and, just beyond that, bigger rockets launching from within the woods and from inside individual trees. It makes for an intense field of light and sound, exploding just above attendees’ heads.

“I think the first principle that I had very early on was to set off everything you’ve got as fast as you can,” Mr. Schjeldahl said on the phone from Bovina. “You cannot possibly go wrong if you do that.”

If pressed, Mr. Schjeldahl will describe his plane system as sculptural, a way to solve what he describes as the problem of the middle-ground, a difficulty in any landscape painting. But it’s not the first place he goes in a conversation about the fireworks. “I sort of purposely slap myself whenever I start thinking about it as an art,” Mr. Schjeldahl said. “I remember one very prominent art critic friend who first came out and afterwards was bubbling to me about Chinese scroll painting and various historical parallels and I had this flash of how artists feel when I talk to them about their work. I had two thoughts—one was I’m really glad she likes it, and the other was I don’t know what the fuck she’s talking about.”

“I’ve discovered that there is no fuck-up that someone won’t regard as a stroke of genius,” he added. “‘That great pause in there!’ Well, I was up in the woods madly flipping a switch and nothing was happening.”

Mr. Schjeldahl’s fireworks are near and loud—very much in opposition to the manicured ones of Long Island’s Grucci company, known for putting on the Macy’s show—and there have been casualties. This year a tree was ignited, though there had been rain earlier so that didn’t become a problem. His first year attending the show, Neal Medlyn, Mr. Schjeldahl’s son-in-law, caught some sparks from a low-flier, and art critic Jerry Saltz is said to have lost what was described as his “only sweater from Barneys” to a stray rocket.

And in this sense of immediacy, the show has always stayed true to its origins. “What makes it a really non-Grucci, more intimate, if elaborate, show is that it has that kind of lo-fi quality,” said New York Times editor Gerald Marzorati. “You’re actually watching people light the stuff off, so I think that’s part of the charm”

Mr. Marzorati is one of the pyrotechnicians at the banks of the stream and has been spending his Fourths on the property from the early days in the 1980s. He met Mr. Schjeldahl when he was writing about art for The SoHo News, and Mr. Schjeldahl was at The Village Voice. When Mr. Marzorati began attending the annual show, there was no house on the property, just a trailer for Mr. Schjeldahl, his wife, Brooke Alderson, an actress who appeared in Urban Cowboy, and Ms. Calhoun. The party consisted of no more than a handful of friends drinking beers and firing bottle rockets.

Through the years, Mr. Marzorati has been a sounding board for Mr. Schjeldahl’s ideas during the planning stage, which begins in the winter. Some innovations work better than others.

“We’ve tried to float fireworks in the stream and also on the pond—he has a pond on his property,” Mr. Marzorati said. “That didn’t actually seem to work.”

Mr. Schjeldahl’s art world friends and colleagues have their theories about why he and his wife go through all the trouble every year.

“I think it must be a release,” said Martha Wilson, the artist and founder of Franklin Furnace, who’s attended the past few years. She’s known Mr. Schjeldahl for years but hadn’t heard of the show until recently visiting friends in the area. “In the same way that being an artist allows me to run an institution because I have that outlet of being an artist so I can sit at my desk and be an administrator. It’s like his Batman persona.”

Naturally, Mr. Horovitz also has some ideas. “I feel like in Peter’s writing the words and the certain phrases that he uses are little explosions,” said Mr. Horovitz. “They take you back for a second. They send you ducking for cover or going to a dictionary to figure out what the fuck he’s talking about. The parallel is Peter does these fireworks, and he’s crouched in the woods ducking for cover, it’s not like he’s standing on a platform, shouting at everybody. Writers are just kind of in a dark room. It’s an interesting parallel, in a way, that he’s secretly dropping these bombs, and that’s kind of what he’s doing with his writing.”

With the fireworks keeping Mr. Schjeldahl busy (“He’s very busy, very busy,” said the writer Deborah Solomon, who has an outstanding reservation “for the rest of [her] life,” at the nearby Mountainbrook Inn for the Fourth; “I never say anything to him in the course of the weekend. It’s kind of like the mother of the bride at the wedding—you hope for a hello and a goodbye”), his wife, Ms. Alderson, is the party’s actual host. Two years ago, for reasons unknown, attendance doubled in size. This was great for the food tables—everyone has to bring one dish, locals bring venison and bear meat, Manhattanites usually try to outdo each other with culinary flare—but was a logistical nightmare for Ms. Alderson. There are now 15-minute cleanup shifts.

“I’ve always just regarded it as a privilege,” said Ms. Alderson, who used to have a general store called Brooke’s Variety in a nearby village, where she’d often extend fireworks invitations to strangers. “It’s a wonderful community thing, everybody gets to see each other, and one day a year at least we’re all in agreement that we really are happy to be Americans.”

“It concludes with a big bonfire and one year we had an artist friend paint a huge Union Jack, which we put on top of the bonfire,” Mr. Schjeldahl said. “There were some English guests at the party who got squirmy about it and I tried to explain that there were no hard feelings.”

Whatever keeps the party growing year after year, either the fireworks themselves or the social event, the patriotism on display from those who show up from the city, and who might be presumed to be too aloof for such an outpouring, is always mentioned as a sight to behold.

“What impressed me so much is that all these downtown avant-garde people are standing there lustily singing ‘The Star-Spangled Banner’ and cheering, really cheering, for the values that the country was built on,” said Ms. Wilson.

Update 9/8: Amended to give proper credit for the National Anthem’s bass. 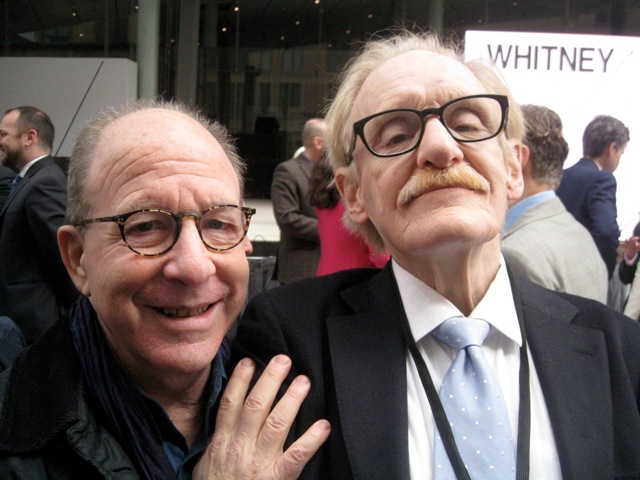