The Observer arrived at Zuccotti Park, across from 1 Liberty Plaza–the site of the camps, kitchen and “media tent” holding up the backend of the “Occupy Wall Street” protest that has been going for six days–just after 3:30 p.m.

Today’s march, which started on Wall St. and headed up to Washington Square Park and then to Union Square–was winding its way back, having lost a few dozen good men to police custody, a.k.a. an out-of-service MTA bus. A protester, Josh Lewis, is tweeting from zipties on the bus, which he reports made its way eventually to 1 Police Plaza.

“In handcuffs yet still tweeting with numb thumbs,” he texted The Observer. “Can’t believe the lack of justice, will call when I’m out (hopefully soon).” Then, he texted, “(torture conditions in multiple vans… ‘rioting animals’) 1 police plaza!!!”

There were reports of between 50 and 100 arrests. Protesters at Liberty Plaza were reporting the names of the arrested to members of the Legal Team–“Kat, with a K! Lou Richardson!” A man with a notepad raised an objection. “No, his name’s Lou Richardson. Or Luke Richardson! Who the fuck knows! Lou slash Luke Richardson!”–who were typing them into a list. Donated pizzas, pasta and bean salad were being served off the park’s marble benches. Liberato’s Pizza on Cedar Street was donating 20 pizzas for every hour a protester was held, protesters told The Observer–we also heard Ben & Jerry’s had sent ice cream.

Soon, NY1 arrived–cheers from about the crowd. “The media blackout is over!”

“It’s difficult for the media to build a narrative because this is a leaderless protest,” said Patrick Bruner, the bony 23-year-old, dressed in a black t-shirt and black pants, who was orchestrating the public relations effort. Mr. Bruner, a recent graduate with an English degree, lives in Bed-Stuy and has been looking for a job for months–he heard about the protest by word-of-mouth and headed downtown last week to volunteer. He shaved his punkish haircut this morning after reading a New York Times story that portrayed the protest as a motley crew of anarchists, hippies and delinquents.

Mr. Bruner’s phone rang. “Hi this is Patrick Bruner, Occupy Wall Street,” he said. “How can I help you?”

It was Nathan Schneider of wagingnonviolence.org, who had just left the scene at Union Square. “Want to talk to a reporter?” Mr. Bruner asked, handing the phone over.

“The police were trying to stop the march,” Mr. Schneider reported. “The Livestream team has been arrested.” That morning, he met a woman who said she was administering the stream–he had just seen her loaded onto the MTA bus which was surrounded by police. “The Democracy Now PR person got an interview with a woman who was pepper-sprayed!” he said, excited.

Among the protesters at the park were many students from Wesleyan and other schools in the tri-state area as well as visitors from other states. The Observer met a couple, he 26, she 21, who had taken a bus from Akron, Ohio, this morning. Members of Anonymous–or at least, people wearing Guy Fawkes masks, the trademark of that group–were seen arrested. The police were enforcing an 1845 law that prohibits two or three people wearing masks to stand together in public, said one protester who had been involved in the effort since it started with an AdBusters call to action in July. He heard about the effort on Tumblr, he said.

PHOTOS: Some Signs as to What Those Wall Street Protesters Might Want >>

The Observer ducked into a coffee shop and found Mr. Bruner typing at his laptop with two large cups of . “I need an assistant!” he said. He was sending emails, watching the live Twitter feed from the arrested protester, and fielding calls from members of the protest’s various teams. “Hey, Google just shut me down,” he said into his cell phone–just a cell phone, not a smartphone–as he shook one hand in the direction of the computer in frustration. “I can’t send emails.”

For sending too many emails? we asked.

We asked about the support the movement had received from businesses and local franchises. “McDonalds has been very friendly,” he said. “Burger King has been exactly the opposite. They actually banned us from purchasing.”

After another phone call, Mr. Bruner glanced at his computer, then at his phone, then looked at The Observer.“The police are amassing on Broadway,” he said.

It was time to go.

As The Observer scurried behind the long-legged publicist, he wiped his brow. “I’ve never done anything like this in my life,” he said. “I think I’m doing a pretty good job.”

Check out photos of the Occupy Wall Street protests. 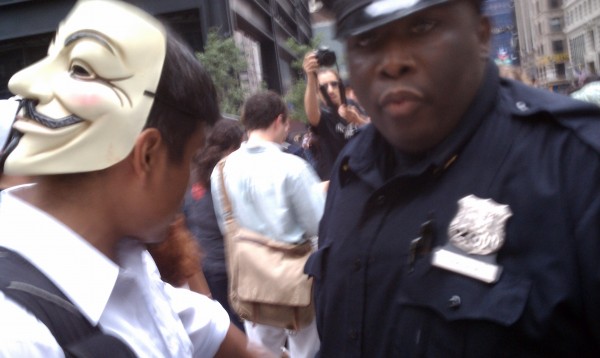