At 1:45 this afternoon, The New York Times‘ City Blog posted a video from Saturday’s “Occupy Wall Street” protest march. The clip, which first received attention when it was picked up  by USLAW.com’s YouTube account, plays in slow-motion, showing a “high ranking member” of the NYPD approaching a group of women standing behind orange netting and spraying a substance directly into their faces. The video identifies the spray as either Mace or pepper-spray, which would concur with reports the New York Observer received on the ground yesterday from Nathan Schneider of wagingnonviolence.org, who told us that “a woman who was pepper-sprayed” was speaking to Democracy Now.


As of the time of this writing, the NYPD has not returned a request for comment to The New York Times. Yesterday alone saw 80 people arrested during the march, and with the so-called “media blackout” over, the attention given to “Occupy Wall Street” has turned in the protesters’ favor. With the release of this second video, showing what appears to be excessive police force (an earlier video Wednesday showed a man being pulled through the streets by the police), public sympathy will most certainly be on the side of the women, not the NYPD, which is why someone in the police department needs to issue a statement about the footage, and fast. 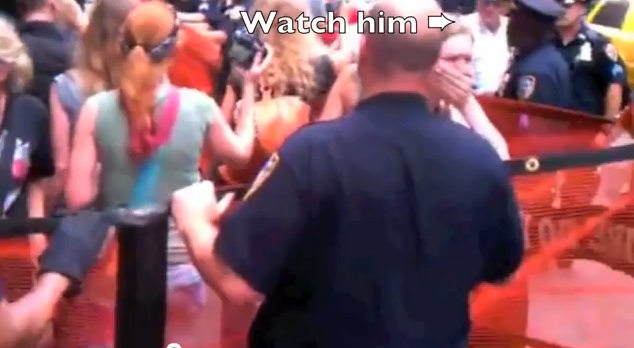