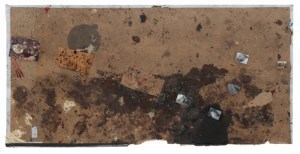 Phillips Chairman Simon de Pury has been the auctioneer at past Guggenheim Galas held in 2006 and 2007, but both were at off-site venues and not held at Phillips. The sale is being called “the first of its kind.” A spokesperson from Phillips said the auction house would be waiving its commission.

Artists included in the sale are such heavyweights as Maurizio Cattelan, George Condo, Jenny Holzer and Richard Serra. Highlighted lots include Mr. Condo’s The Butler, Lee Ufan’s Dialogue and EXHM/DS24 by Sterling Ruby, pictured to the left.

“This year we will precede our Part I evening sale with a special auction entirely devoted to raising funds for this great institution,” Simon de Pury said in a statement, no doubt hoping that bidders will stick around for the evening’s main lots. “This will allow collectors from all over the world to buy great art while contributing to the global activities of the Guggenheim.”