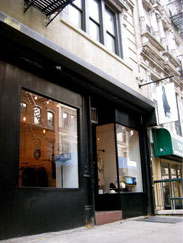 If you’ve been rabidly following the news about the new gallery-themed Bravo reality show Paint the Town, you’re in luck! We may have uncovered one of the galleries that the show will follow.

Announced this past April, the show was originally called Gallery Girls and promised to “follow the lives of six young, 20-something women that work in New York City’s hippest art galleries.” The show is being produced by Magical Elves, the company that makes Top Chef and Work of Art.

Today, an anonymous tipster wrote in to neighborhood blog Bowery Boogie to say that “Bravo’s Gallery Girls reality show began filming last night at the commercial south unit of 237 Eldridge St. Owners of End of Century on Rivington [at 175] to star in the series showcasing them opening a second storefront.”

End of Century describes itself as an “unconventional platform for creatives that is staged as showroom, store, salon, and exhibition space” on their Kickstarter page soliciting donations to fund their new location, which opens on Friday. Co-founder Chantal Chadwick (described as “fresh-from-college” by New York‘s The Cut last year) told Gallerist over the phone that, though End of Century is a gallery, the new space at 237 Eldridge (the former home of Lower East Side gallery DCKT Contemporary) will sell jewelry, design goods and art books as well.

“I don’t mean to be enigmatic or anything like that,” Gallerist told Ms. Chadwick. “It’s just this Bravo TV show-“

“I think my phone is broken,” Ms. Chadwick said. “You’re kind of breaking up.”

Before hanging up she offered to put us in contact the some of her business partners. A follow-up email has not yet been returned.