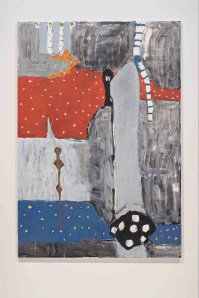 Zig Zag Cubism #2 is a good place to begin a tour of Richard Aldrich’s new show, so it’s lucky that the gallery hung it by the entrance. Two long, square pieces of wood are affixed to a white canvas. The one on the left, painted in a red and white peppermint-stick pattern, is in the upper half, and the one on the right, an extremely dark green, is in the lower half, but they both cross through a small black rectangle painted in the middle. Arranged in three separate squares around the sticks, like smiley-face vers libre, is a scrawled black text reading, “It is a text, but what is most important is/ understanding it as a text written on a painting hanging in a gallery/ next to two other paintings that have the same motif.” It hangs next to no other paintings.

Half a dozen self-conscious jokes about Cubism, Suprematism, Dada, Deconstruction and Minimalism are compressed here, with great efficiency, into a single, spring-loaded gesture. But they aren’t only jokes, and the painting’s placement (alone, on a white wall, in Chelsea, in New York) isn’t the only one that’s important. The placement of each joke together with that of the painting as a whole creates a dynamic tension that carries its own meaning even as it displaces more traditional meaning toward the viewer, away from the wall. In other words, it’s simultaneously a painting-shape installation and, only just barely, perhaps, but very distinctly, an actual painting.

This balance shifts slightly as one moves around the room. Cool and elegant oils like Mandolin, whose stormy grays, star-studded red-and-blue fields, and thin, Giacometti-like figure bring to mind an art show in Asgard, and Automatic Drawing, with its Klee-meets-Rube-Goldberg circuit diagram, are like painting-shape drawings, depending not on the density but on the precision of their details.

Here and there the balance tips over, as in Pan, an all-too-site-specific found copy of Knut Hamsun’s 1894 novel. But at its best, the dialectic Mr. Aldrich constructs between context and content amounts to a productive practice in itself. Making pieces that can be combined does require them to have a certain minimal smoothness of surface, but it also creates the possibility of an exponential expansion of meaning. Dark Was the Night, Flat Were the Floorboards—the title alludes to Blind Willie Johnson’s 1927 song “Dark Was the Night, Cold Was the Ground”—is a small Ab-Ex bonfire in black and gray with scratches and a burst of orange; Future Painting #1 is an artist’s stretcher wrapped tightly in white gesso muslin. Each piece has its own set of meanings, but when hung beside each other, they form a new set—not instead, but in addition.

The three Robert Melee pieces hanging in the office of Andrew Kreps Gallery, on the other hand, perform a discreet bait and switch. Made from fiberglass brightly painted with enamel, these curtainlike, painting-size objects may appropriate Pop Art exuberance to satirize the reduction of modernist ideals to aspirational home furnishing, or they may be using fine art to do outsider art, like a blues singer covering the Rolling Stones. But whatever boundaries they may transgress, the transgression is purely formal, and so it is distinctly contained.

The switch comes when you walk through four hanging strips of black plastic, ominously sucking in the air conditioning, into the artist’s outsize memory of his own childhood home.

There the floors are puke-green wall-to-wall and the space is dominated by a double-wide, suburban coliseum of a staircase. Since the artist’s been gone, the grandfather clock, refrigerator, bookshelf and entertainment unit have mutated into sculptures. The baby-boomer optimism that laid out so much awful carpeting has become a kind of mercenary, uncentered voyeurism, and it’s not clear whether we’re meant to sit on the stairs watching the multimedia video installation Process Unit or to stand next to Process Unit admiring the marbleized risers of the stairs. In fact, social space is the only space left: the steps ascend directly into the ceiling.

A brown door is removed from its minifridge to become, in Flesh Drape Door, a cold pose of false abundance; a wall-mounted bookcase becomes, in Rite of Spring Mattress Unit, a reverse-symmetrical video mirror showing a naked, kneeling actor, color corrected to a waxy orange, wearing a revolving procession of wigs; and Clock Her, a grandfather clock cut through the middle and mounted with a listing mannequin covered in fiberglass covered in brights enamel, indicts materialism not as destructive or evil, for a change, but simply as inadequate.

A triangular wooden shrine with marbleized sides and glitter, Process Unit hosts a trinity of video screens as well as photos of naked clowns; blue and yellow plastic cups; half a dozen bottles of liquor and wine in varying sizes, with various glasses; diner-style ketchup and mustard bottles; a marbleized silver tray; and a crocheted poodle. The bottom left screen follows a man with an erection, his face hidden; the bottom right follows a ballerina dancing with another grandfather clock; and the top shows an actor with a serene, leonine expression being covered in plaster and paint. (“Sploshing” is the term for food fight as sexual fetish.) The funniest touch is a thin drawer built into the bottom, as if to keep the most important garbage separate. “Our sprawling material abundance hasn’t become garbage,” it says. “It was garbage to begin with.”