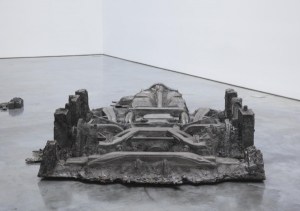 The materials of Richard Serra’s two enormous new sculptures, currently dominating the Gagosian Gallery on 24th Street, will be recognizable to anyone who knows Mr. Serra’s work. They’re made from curved, continuous steel plates more than thirteen feet high, rusted into shades from powdery orange to Martian mahogany, and marked with what are or appear to be scales, drips, streaks, stretch marks, shadows, calcium deposits, stains, and lightning bolts. The rust continues so evenly that it’s only the occasional glint of a silvery, unrusted corner that looks like evidence of the human hand. Seen from above, their shapes are also recognizable: Cycle is a triskelion composed of three floppy, interlocking “S”s, which create three roughly circular clearings and three spiraling corridors.Junction, also made of steel plates doubled into corridors, looks more like a pinched, four-pointed star.

An abundance of visual references presents itself, too. Two great, bowed curves meeting in a single opening—the visitor’s first view of Cycle—seem to mean something clear enough, particularly when, on closer inspection, the one opening actually offers two, one leading quickly into an empty round chamber, the other continuing on with narrow walls that move rhythmically together and apart. Walking between them doesn’t feel like something that should be done in public. But then that tunnel becomes a primordial cave, and the cave becomes the ocean, and the swaying of the walls, the tides, and you pass glaciers and teepees and burial mounds and abattoirs until you emerge into a grotto where a surprising patch of light falls on a splash of brighter orange. When you stop walking, you see nothing but steel.

Because the only place you can see Junction and Cycle from above is in photos on the gallery’s website. The impossibility of seeing the whole of a piece from any single angle, a defining feature of sculpture as a medium, is raised in Serra’s work to a monumental haughtiness. Their size and the size of their fame always draw an audience—people take pictures of their friends against the rust while little children go running past them—but it’s an audience that’s merely permitted, not required. And the pieces are certainly activated by walking. Every step reveals a new grand gesture of color and shape, and a numinous presence seems to hover behind you as you move. But the effect is less like art speaking to you than it is like a striking desert vista changing the way you hear yourself. Even the strips of black rubber hidden between the joints read like some geological buildup. It’s sculpture that can be looked at but refuses to be seen.

Matthew Barney’s “DJED” at Gladstone Gallery, another crowded spectacle, is equally monumental in its conception and also uses large quantities of metal to imposing effect. But where Serra’s monuments can be remote, casting off emotion, images, and ideas with the same indifferent tranquility, the four large sculptures here have, if anything, as many ideas as they can handle.

Canopic Chest, DJED, Secret Name, and Sacrificial Anode, being shown along with a dozen drawings, were made in connection with a multi-part, multiple-site-specific, not yet completed opera—directed with Jonathan Bepler, who also wrote the music—that takes its name and its conceit from Norman Mailer’s 1983 novel Ancient Evenings. Mailer’s novel follows one ancient Egyptian soul through death and rebirth in three successive incarnations; in Mr. Barney’s opera—which hovers over “DJED” like the ghost of Egyptian grandeur over the British Museum—the hero is incarnate as multiple cars: a 1967 Chrysler Crown Imperial, a ‘79 Trans Am, and a 2001 Ford Crown Victoria.

DJED, twenty-five tons of iron poured live during the performance of the opera’s third act in Detroit, is now a smokey gray puddle with two spindly tributaries flowing out to two hard graphite blocks, with a casting of a car’s  undercarriage set beside it. Secret Name is a broken, melting bathtub cast in lead and partially covered in white plastic. (There’s also a short, thick wall of black plastic, a piece of copper with the texture of scorched pig skin, and a self-consciously arranged cast lead rope.) Secret Name shares with DJED the power of its monumental scale, which, even prior to its particular formal details, inspires you to imagine our small American stories with the silent, alien grandeur of the distant past. Sacrificial Anode, meanwhile, a row of crowbars and rods cast in zinc and arranged on a white plastic beam, marks out an intriguing alternate direction: the smallest piece, it’s also the only one that could really stand alone as a sculpture without the context of the larger project.

The supporting mythology of divine incest, murder, and miraculous rebirth, as detailed in the illustrated libretto booklet, seems disturbingly well chosen and fresh. After Osiris, the prototypical Egyptian god-king, is murdered and dismembered by Set, for example, his wife Isis finds and reassembles all of the pieces except the penis, which she can’t find and so replaces with a replica made of gold. Canopic Chestis a bronze casting that looks like a pile of black slag molded into the shape of a car hood and infested with short lengths of protruding wire, and on top of it there rests a long, golden, ibis-shaped crowbar. What could possibly be a better metaphor for where we stand as a country than a reassembled Chrysler sarcophagus with a prosthetic gold penis?