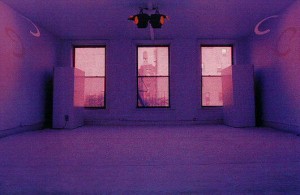 Early in his career, the composer La Monte Young used electronic instruments to play a single frequency in his loft 24 hours a day, often for months at a time. The never-ending sound induced in visitors “a drone state of mind,” Mr. Young once told The New York Times.

Nowadays, that sensation is available to anyone who visits The Dream House, a full-room installation opened by Mr. Young and artist Marian Zazeela, who handled the lighting, in Tribeca, on Church Street, in 1993. The Dream House closed in June, as it does every summer, but the MELA Foundation, which maintains it, announced it will reopen to the public on Sept. 24.

Visiting The Dream House can be a baffling, delirious experience. The room is soaked in purple light. Huge speaker stacks emit a constant, potent drone, which music critic John Rockwell called a “cosmic throb.” It is often very hot, but it is not uncomfortable. There are pillows, and you can recline, letting the sound work on you. It’s really something.

Having been developed by Mr. Young and Ms. Zazeela back in the 1960s, The Dream House was located, from 1979 to 1985, in a loft on Harrison Street and funded by the Dia Art Foundation. When Dia ran into financial trouble in the mid 1980s, it sold off the building, and the two artists later relocated to its current location. (They live above The Dream House.)

“[Dia] poured $4 million into Dream House,” by La Monte Young and Marian Zazeela: a building on Harrison Street in Lower Manhattan that housed Zazeela’s light projections and where Young’s electronic music played 24 hours a day. Dream House had its own guru in residence, Pandit Pran Nath, the Indian singer and teacher, and a staff that recorded every note of music and word of conversation and photographed and logged every meal eaten there.”

These days, the work is open to the public Thursday through Saturday, from 2 p.m. to midnight.