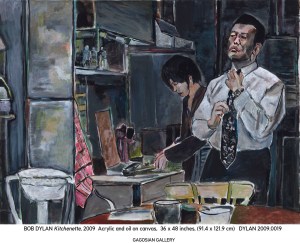 Bob Dylan’s career as a painter is soured by the fact that many people first encountered his brushwork on the cover of his worst album, 1970’s Self Portrait; it features, appropriately, a self-portrait. His head appears to be floating in the pale blue ether and his nose and mouth are exaggerated blobs resting on his face. The lines are otherwise hard-edged and coarse, adding to the painting’s dubiously caricaturelike style, which borders on incompetence. The word “worst” is not used lightly.

In his 2004 autobiography, Chronicles, Mr. Dylan himself admitted, in so many words, how powerful a failure Self Portrait was. His description of recording the album could just as easily pass for an account of painting its cover: “I just threw everything I could think of at the wall and whatever stuck, released it, and then went back and scooped up everything that didn’t stick and released that too.”

Give a celebrity a canvas and you often end up with a disaster. Artwork by stars gives rise to a paradox: audiences would likely not care about the work if it hadn’t come from the hand of someone famous, but the final conclusion is typically “Don’t quit your day job.” As always, Mr. Dylan is a different kind of beast. His first exhibition of paintings in New York, “The Asia Series,” opened this week at the uptown branch of Gagosian, the largest gallery in the world. On view right now at Gagosian’s other locations are solo shows by the likes of Richard Serra, Andy Warhol, Dan Colen and Robert Rauschenberg. Mr. Dylan is no Rauschenberg, but the pairing of the singer with Gagosian makes sense, in a kind of Warholian sense of celebrity. It is a union of two men—roughly the same age—who are at a point in their careers where they can do anything they want with little risk to their reputations. Mr. Dylan can paint scenes, heavily influenced by Gauguin’s Tahiti works, of his misadventures in Japan, Korea, China and Vietnam that cast his subjects as radically other, and Larry Gagosian can show them.

Opium, for instance, which Mr. Dylan painted in 2009, is quite simply perverse. A young woman lounges in a cluttered bedroom, eyes shut in a loopy opiate haze. Scattered about the scene are a fan, a vase with what appears to be bamboo, containers of makeup and a large pipe. The woman rests angelically, framed in a come-hither pose that is directed entirely at the male artist. The Gagosian exhibition is being touted as “a visual journal of his travels” and comprises “firsthand depictions of people, street scenes, architecture and landscape.” Presumably, Mr. Dylan was in this opium den, gazing at this young woman, approaching her but never arriving for the sake of his art. Whether or not that is true does not matter. For years, people believed Mr. Dylan grew up in a traveling circus and hoboed his way across the country in freight train boxcars because he lied to a publicist at Columbia Records back in the ’60s.

Perversity and possible inauthenticity aside, Opium is not a bad painting, but one wonders how much of its interest rests on the person making it rather than on the quality of the work itself. It is not just a depiction of a young woman on drugs, it is a depiction of a young woman on drugs made by the man who wrote “Like a Rolling Stone.” It is all the more tempting to draw connections between Mr. Dylan the singer and Mr. Dylan the painter because the styles overlap—he is, at once, effortless and portentous. Opium showcases the same strange interplay of universality and narcissism that is also at stake in much of his music, especially the later songs. The oversexualized image recalls the opening line of Mr. Dylan’s 2006 Modern Times album, a line so specifically about Mr. Dylan himself that it somehow taps into an identifiable desire: “I was thinking ’bout Alicia Keys/I couldn’t keep from crying/she was born in Hell’s Kitchen/I was living down the line.” Few people could get away with such a lyric. No matter what one thinks of Alicia Keys, he manages to turn the humorous sexual pining of a dirty old man into a gloomy commentary on the inevitability of age and impotency. But would we care if that line was sung by, say, Paul Simon? Looking at his artwork, it is hard not to consider the very real possibility that we forgive Mr. Dylan a certain level of mediocrity because when he is good he is so much better than anyone else.

Such criticism is superficial, though. At this point in his career, everything Mr. Dylan does is so thoroughly about himself that there is no separating him from his work. This helps explain the press release’s strong push for a biographical element to the paintings. The claim that he witnessed the scenes therein—that he was there—is pleasurably ridiculous, even if it were true, something like a hippie hanger-on proclaiming, “I was there when Dylan went electric, man.” It all seems part of the point. Labelle Cascade, like many of the works in the show, is framed as if the painter were looking on the scene before him by separating the branches of a tree, seeing something he is not supposed to, remaining invisible (though the woman in Opium appears to exist only for the painter, it is not for nothing that her eyes are shut). In Labelle Cascade, a group of four people rests by a river. Two men are drying themselves with white towels while an old woman sits in a hammock and a younger woman smokes. The way each figure seems to be deliberately—almost uncomfortably—avoiding direct eye contact only calls more attention to the fact that they are being watched, turning the gaze of the painter back on itself: we are less interested in the subjects than we are in the fact that Mr. Dylan is observing them.

In embracing their creator as their absent raison d’etre, these paintings are far better than Mr. Dylan’s other forays into the visual arts. He has steadily improved since his first major exhibition, “The Drawn Blank Series,” shown in Germany in 2007. Those works, based on sketches Mr. Dylan made on tour between 1989 and 1992, looked much more like the hobby of a man with too much time on his hands and too many thoughts in his head. At best, the works elicited a response similar to the exhibition’s title and at their worst a deep cringe. The turgid Rooftop Bar, from that series, is another male gaze view, this time of the curves of a woman’s lower abdomen. The image is both pointless and vaguely misogynist, quite literally trapping its subject in eternally unaware submission, as is the case with many of Mr. Dylan’s worst love songs (consider the imagery of imprisonment from 1983’s “Don’t Fall Apart on Me Tonight”: “I ain’t too good at conversation, girl/So you might not know exactly how I feel/But if I could I’d bring you to the mountaintop, girl/And build you a house made out of stainless steel.”)

The new paintings at Gagosian are more nuanced. The style is still haggard and rough, but that very crudeness creates meaning. Kitchenette features a man and woman in their kitchen, both avoiding each other’s gaze by looking intently at nothing. The man is tightening his neck tie, the woman is doing some activity that is obscured by the jaggedness of the brush strokes (it is either packing a suitcase or chopping some vegetable). The anonymity of her actions contributes to the work’s ambiguous menace: the man wears a deep frown; he could just as easily be heading to his execution instead of work. Another image shows two men smoking cigarettes. One man has lit the other’s cigarette for him. The man who has just been lit up looks directly into the frame confidently with one open eye. It is the only work in the show in which a subject looks into the painter’s gaze. Naturally, the painting is called Big Brother.

It is as if Mr. Dylan were daring his subjects to make eye contact but they cannot. (“A million faces at my feet, but all I see are dark eyes,” he sang in the final line of his 1985 album Empire Burlesque.) That lack of connection is most notable in Emperor, one of the show’s strongest paintings. The emperor is seated, clothed in robes and wearing a headpiece that looks more like a crown of unruly hair. Surrounding him is a group of women in white with big cartoonish grins on their faces. The emperor’s eyes are fixed on some spot on the ground and his mouth is slightly wrinkled from either the beginning or end of a self-satisfied smile. It looks like a self-portrait.