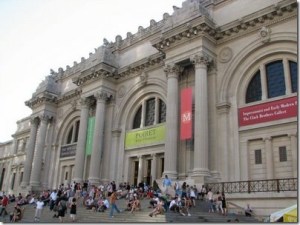 The Metropolitan Museum of Art.

In a battle that sounds like it is straight from a Don Delillo novel or Donald Barthelme story, two veterans with hot dog stands have set up shop by the Metropolitan Museum’s steps, causing a feud between other vendors and city and museum officials, according to the Times‘ City Room blog.

“Their arrival has upset a peaceful period there during which three other vendors operated in relative harmony,” the Times writes. There was a hot dog cart, a pretzel stand and a cupcake and milkshake seller. The spots are coveted by vendors for their high traffic of tourists and visitors to the museum. The pretzel and cupcake stands pay the city $100,000 a piece to sell their wares. The hot dog cart, owned by another veteran, Dan Rossi, operates for free. To do so, Mr. Rossi invoked a 19th-century New York state law that allows disabled veterans to operate vendor carts for free in certain areas of the city.

The two new veterans, Armando Crescenzi and Harold Dalton, are invoking the same law to operate for free. They arrived in July. The Times visited Mr. Crescenzi’s cart on Sunday and found him to be asleep in a chair next to the stand. Upon waking, he said the foot cart is “a partnership” between him and an unnamed operator. The operator oversees food sales, while Mr. Crescenzi handles “licensing and administrative issues.” Presumably, these issues are myriad.

“They got the cart, I got the permit: it’s a partnership,” he said. “I’m 50 percent of this operation, even if I show up and take a nap.”

Apparently, Mr. Dalton is running a similar operation (though there is no word about him taking naps on the job). Both have received tickets everyday since their arrival. Mr. Crescenzi described Mr. Rossi as “a millionaire who wants this whole area for himself.”

The Times says more vendors are also moving into the area. Who knew there was so much money in hot dogs?