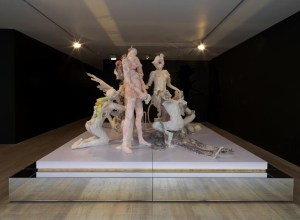 The Brant Foundation Art Study Center, the private museum started by collector and publisher Peter Brant at his estate in Greenwich, Conn., and run by his daughter Allison Brant, has tapped Canadian sculptor David Altmejd for its fall show, which will open to the public in November.

In years past, the Brant Foundation has commissioned contemporary artists to present ambitious, museum-filling shows of new work on its premises. Taking up the task for the past two shows were the compulsive New York painter Josh Smith and the Swiss sculptor Urs Fischer 2010, whose show included a dramatic installation of his 2007 work You, which consists of a deep hole dug through the floor of an exhibition space.

Mr. Altmejd’s last solo exhibition in New York was earlier this year at Chelsea’s Andrea Rosen Gallery. Its centerpiece was an intricate Plexiglas sculpture that measured more than 20 feet long. He will need a few of those hulking pieces to fill the Brant Foundation.

The by-appointment-only museum opened in 2009 with a group show called “Remembering Henry’s Show: Selected Works 1978-2008,” a tribute to a landmark exhibition that the pioneering Metropolitan Museum of Art curator Henry Geldzahler (a major influence on Mr. Brant) staged in 1969, which showcased some of the more than 1,000 pieces in its collection.