(This page is not all-inclusive and will be updated as events occur. Have a suggestion? Leave it in the comments!)

Early on, the NYPD stayed on the sidelines of the protests, with only six or seven arrests made during the first three days. The arrests were mostly of protestors wearing Anonymous disguises, which violated a long-dormant New York law dictating “No Guy Fawkes Masks.” Two people were arrested for entering a Bank of America building while wearing masks, four simply for wearing the masks in dangerously close proximity to one another, one for jumping a police barrier, and one for disorderly conduct, according to a NYPD statement on September 19.

There were other reports and videos, not immediately picked up by mainstream outlets, that the police had broken down the tents that several protestors had set up during the rain.

The first accusation of excessive force came Tuesday, September 21, when a video was recorded of the police dragging a man named Jason Ahmadi across the street while he lied unresisting and bloodied. That day, seven more arrests were made, a number equal to the amount of arrests made during the prior three days.


Anonymous quickly identified the officer as Deputy Inspector Anthony Bologna, formerly of the NYPD’s 1st precinct and currently working in the city’s counterterrorism unit. It was later revealed that Inspector Bologna has previously been accused of using excessive force. Shortly, another video emerged from the same day, showing Bologna spraying indiscriminately into a group of sidewalk pedestrians like someone spritzing Lysol.

Inspector Bologna’s behavior is currently under investigation by both NYPD’s internal services as well as Manhattan’s D.A.’s office.

Currently, the NYPD has resolved not to take action to remove the protestors from the public park,, much to the chagrin of Brookfield Properties, which technically owns the space. 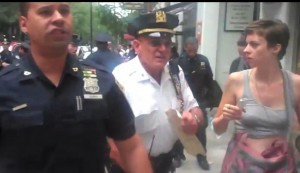