Jonathan Groff and Eddie Kaye Thomas in "The Submission."

Theater, like most entertainment, requires suspension of disbelief. (Wait, why are these people living their lives in a three-walled, brightly lit room?) But tolerance for that suspension exists on a continuum, and a serious drama about a hot-button political topic has a much greater obligation for plausibility than does, say, a musical comedy about Mormon missionaries.

The actor and playwright Jeff Talbott has delivered a serious drama about a hot-button political topic—a spiky, funny message play called The Submission. It’s about a gay, white 20-something named Danny (played by Jonathan Groff, charming and slippery and the best he’s been since Spring Awakening), who writes a message play about a black mother and son struggling in the projects, for which he invents an African-sounding pseudonym to lend authorial credibility. When the script is accepted by the prestigious Humana Festival, he hires Emilie (an excellent, fierce Rutina Wesley), an African-American actress, to pretend to be its author. She takes the job, excited to help get the play seen and lured by her promised share of the royalties. Inevitably, the scheme collapses, for all the obvious reasons but also because Danny turns out to be something of a racist and Emily something of a homophobe.

The Submission opened last night in an MCC Theater production at the Lucille Lortel, a top-notch staging smoothly directed by Walter Bobbie and convincingly acted by an excellent quartet of young pros. (The other actors are Eddie Kaye Thomas as Pete, Danny’s stoic, wry boyfriend, and Will Rogers as Trevor, his goofy, conflicted best friend, who falls in love with Emilie.) David Zinn’s scenic design is efficiently functional and subtly witty. And Mr. Talbott’s script is carefully structured, building elegantly from light to heavy as the plot progresses and tension mounts, and it offers smart, punchy dialogue, while raising provocative questions.

This all makes The Submission an insightful and somewhat damning take on political correctness among ostensible liberals in the so-called post-gay and post-black eras—unless, that is, it’s an unconvincing melodrama that speaks in clichés. Your reaction will depend entirely on your willingness to ignore the play’s implausibilities.

In a play striving for realism, it’s tough to imagine that anyone—the writer or the actress—would think this faux-black-author scheme would be a good idea, or even that Danny would, over coffee, sketch out his scheme for an actress he barely knows. (What if she’d said no, and what if she mentioned it to anyone else in their mutual off-off-Broadway world?) Mr. Talbott tries to paper over this problem by adding another motivation: that both Danny and Emilie are entranced by all the money they’ll make if the play is successfully produced. But this is even more problematic—who was the last person to get rich from playwriting? From festival-produced playwriting? And, finally, as bits of Danny’s racism and Emilie’s homophobia begin to slip out, it’s not that it’s so hard to imagine that they have these suppressed feelings—as Avenue Q reminds us, everyone’s a little bit racist—but that, as theater-world New Yorkers, they don’t know better what to keep to themselves.

If you get hung up on these points, the play will seem soulless, no matter how well produced. But if you’re able to accept them—and you very well could; they’re relatively small implausibilities—it’s hard not to be impressed.

There are real ideas at play here—the limits of political correctness, the value of competing claims of victimhood, the question of whether there’s bigotry buried within all of us—and they’re confronted by real characters. Danny is an especially rich one, a seeming nice guy slowly revealed to be a heartless manipulator, and Mr. Groff plays him superbly, retaining much of that initial affable manner even as fangs start to appear in his broad smile.

“It’s taut. It’s mean,” Trevor tells Danny when he first reads his play. “It feels very—I hate this word—authentic.” But the whole problem is that it’s not really authentic, not with the scrim of a fake author. That nagging inauthenticity is the trouble, too, with Mr. Talbott’s otherwise taut and mean play.

Or, on the other hand, you could give up on plausibility—and logic—entirely. That’s the fun of Eugène Ionesco’s first play, the absurdist gem The Bald Soprano, which he wrote in French in 1948 and which has been playing continuously in Paris since 1957. Its English translation, by Donald M. Allen, came to the United States soon thereafter, and a crisp and delightful Pearl Theatre Company revival opened at City Center Stage II Sunday night. Brad Heberlee and Jolly Abraham in The Bald Soprano

Ionesco dubbed The Bald Soprano an “anti-play,” and it is indeed in some ways the opposite of a play, as a play is understood in the conventional sense. Things happen, but not with any linear progression or coherent motivation, time jumps around, dialogue is frequently nonsensical. Mostly the characters—Mr. and Mrs. Smith, their guests Mr. and Mrs. Martin, the maid, and the fire chief—speak in pleasant non sequiturs.

Ionesco was inspired to write the play while trying to teach himself English with a repeat-the-phrase program, and the dialogue has the feel of a particularly puckish language primer. “There, it is 9 o’clock,” Mrs. Smith says at the play’s start, after a chime has tolled 17 times. “We’ve drunk the soup, and eaten the fish and chips, and the English salad. The children have drunk English water. We’ve eaten well this evening. That’s because we live in the suburbs of London and because our name is Smith.” (The Observer was reminded of the apex of our Hebrew-school career, when we could form the complete sentence “The teacher is on the  table.”) Mr. Smith, for some reason, replies with a cluck. Dan Daily and Robin Leslie Brown in The Bald Soprano

As directed with deadpan and occasionally slapstick precision by Hal Brooks and performed by an equally deadpan cast from the Pearl resident company, the whole thing is seriously goofy and thoroughly enjoyable. There are glimmers, naturally, of a deeper point: the futility of communication, the sameness of communication, the interchangeability of peoples’ words and thoughts and problems.

Or maybe it is this, as, in the play’s final moment, the actors previously playing the Martins say in beginning the Smiths’ opening exchange: Whatever you’ll say, it’s all just more of the same. 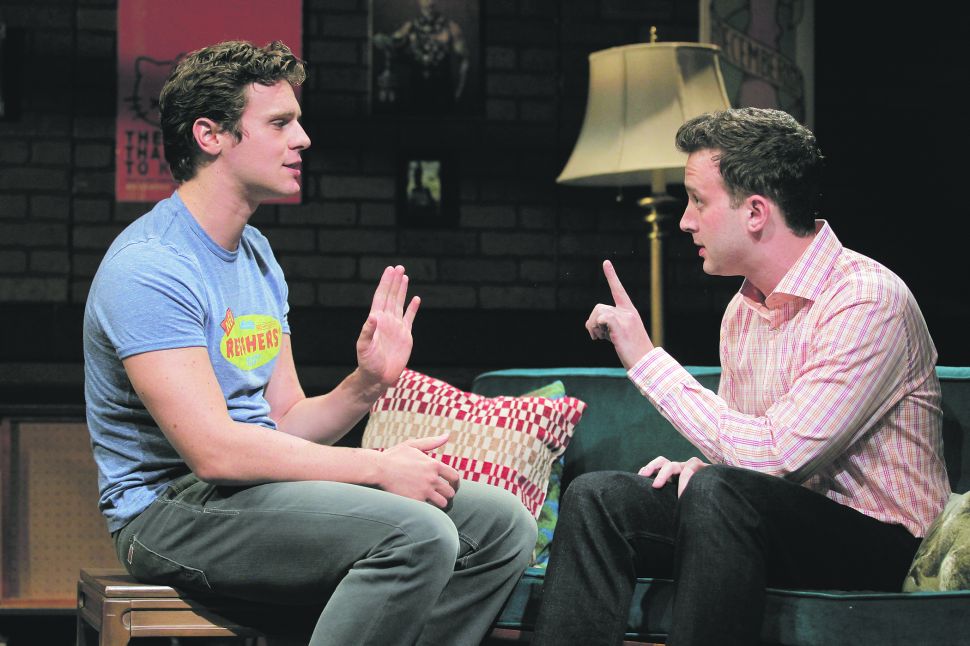