Yesterday we reported on the #OccupyWallStreet protests that began on Saturday and continued over into Monday morning’s banker commute. But if groups like Anonymous were hoping to delay financiers on their way to work, the broken water pipes on the A/C/E line probably did a better job.

The New York Times reported that only six arrests were made between Saturday and today; most of them for people wearing ski masks (or in one case “a plastic mask”…wonder what that was) over their faces. Another woman was arrested for writing something in chalk on the sidewalk. The biggest altercation seems to have been between a police inspector and a guy in an orange hat who was obstructing the pathway that was cleared for protestors. (The police tried to reach over the barrier to catch the guy, but ended up falling on his face, something NYT has helpfully documented in their slideshow of the event.)

So no, the protests did not shut down Wall Street for the day, and the faceless corporate drones (ironic, since the protests were foiled by pesky NYC mask laws) were able to go on living their lives and bolstering the American economy instead of letting it all crumble down like the end of Fight Club. In fact, by the middle of the day one reader commented that the peaceful protest was turning more into a peaceful lollygag:

These guys are across the street from my office. Right now the park is about half protesters and half construction workers having lunch. Everybody seems to be enjoying the fall weather.

See? We all can get along after all! And if you couldn’t tell from looking out your capitalist Wall Street window, the protestors are still here, though their numbers now rank somewhere in the low hundreds, not thousands. 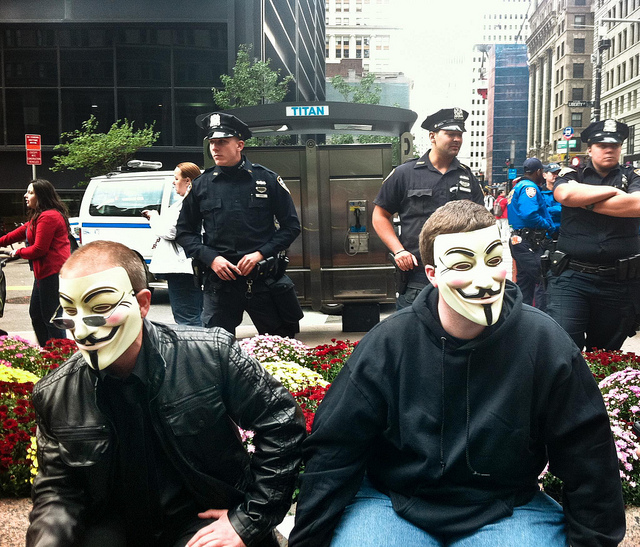