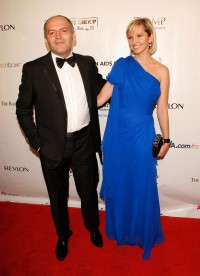 At a net value of $3.3 billion, Mr. Pinchuk was ranked at #336 on a recent Forbes list of the world’s richest people. He owns six TV stations in his home country, is active in AIDS charities and founded the Pinchuk Art Centre, a private museum in Kiev. Though art collecting is a relatively new endeavor for this Renaissance man, he’s thrown himself headlong into it — he reportedly paid $23 million for Jeff Koons’ Hanging Heart.

Elena is the daughter of former Ukrainian president Leonid Kuchma and the two have three other children together, Maria, Roman and Ekaterina. They haven’t settled on a name for the baby.

“Both mother and baby are happy, healthy and doing well,” according to the press release.