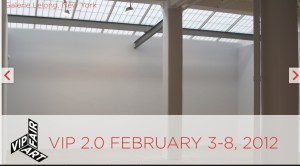 The organizers of the VIP Art Fair announced that the online show will return with for a second round, with VIP2.0, Feb. 3 through Feb. 8–older, wiser, and a little more technically functional.

Organized by the James Cohan gallery, VIP blazed a trail that many start-ups have followed this year – Art.sy and Paddle 8 among them – and their version of the internet art sale offered galleries the chance to participate in an “online art fair” that was plagued by technical problems, to the point where VIP offered a 50 percent discount to participants, some who had paid as much as $20,000 for their booth.

With a new in-house vice president of engineering and promises of technical improvements, organizer Jane Cohan told The Observer that the new site is ready for all visitors and welcomes the competition from others who have moved into the space. “It does bring a lot of confidence that this is a space that needs a lot of exploring,” she said of other sites. “And our proposition is very strong.”

This year 138 galleries participated in the first VIP Art Fair, and Ms. Cohan said the new fair has already netted around 100 galleries, with another three months to recruit any of the galleries that were hesitant to return. Notable holdouts not back for round two include Gagosian Gallery, Hauser & Wirth, Michael Werner, Andrea Rosen and Gladstone Gallery.”We’re still in conversation with the galleries from last year, for sure,” Ms. Cohan said. “Some of the cautiousness tends to be about whether they’re going to be able to have fresh material to service all those other art fairs, so that’s part of their considerations.”