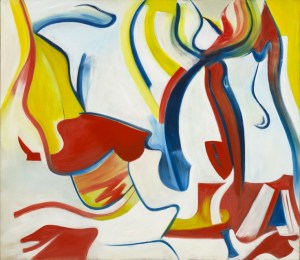 It sounds terrible but I really didn’t like the de Kooning show. Perhaps one shouldn’t admit to such a thing in public, and yet I feel someone has to come forward and say it, and then try to explain it. Art is a visual experience, so words often fall short, but in this case I won’t mince mine, because the show is 90 percent predictable and formulaic. Today it is virtually blasphemous to speak badly of the great Willem de Kooning, especially since a 750-page, Bible-size biography written by Mark Stevens and Annalyn Swann received the distinction of having been awarded no less than a Pulitzer Prize. Did I read it? I tried, but I’m a student of the postmodern philosopher Jacques Derrida—I don’t believe in myths of “origin,” so I don’t see why an artist’s life really matters. My interest is in the work.

Of course histories are good marketing, and while every government, university and museum likes to write and rewrite them, my mind is a suspicious one, and I won’t easily buy into myth making. I did study the “New York School” of artists in college, those hard drinking Abstract Expressionists from the ’50s. I thought they were cool, their lives were tough, they smoked a lot of cigarettes, they womanized and they made great paintings. The names Jackson Pollock, Barnett Newman, Mark Rothko, Clyfford Still and, of course, Willem de Kooning ring in my ears like the Rat Pack of Frank Sinatra, Dean Martin and Sammy Davis Jr. But though I love Ol’ Blue Eyes, today nobody’s really that interested in his music, and the paintings of that time may be great, but they’re definitely not part of today’s zeitgeist. So, a 12-room, 17,000-square-foot show that includes almost 200 paintings with an appraised value rumored to be over $4 billion not only feels unnecessary; it also lacks any relevance to the art of today.

But if it’s great art, you might argue, does the timing matter? Willem de Kooning is without question a huge figure in art history and, as the catalog says, he’s never had a full career retrospective. But my eyes were saturated with de Koonings long before this show ever went up. Why? Because the galleries and auction houses have been full of de Koonings for years now, and I’ve seen show after show after show of them at Gagosian, then L+M and now at Pace. In fact, before MoMA hung the show, I feel like I had seen almost every possible style of de Kooning, with prices that have gone from strength to strength.

This story is far from untold; for proof just look at the list of the show’s first-tier private lenders, great art lovers like Henry Kravis, Glenstone (sadly it’s not a Scotch whiskey, it’s the name of the mega-collection of Mitch Rales) and David Geffen, who cleverly hoarded several key works in the bust of the mid-’90s, including Woman III, which he reputedly flipped to hedge fund king Steve Cohen for $137.5 million a few years ago.

All in all I felt like I had seen them all somewhere before, or ones like them. Hanging them all together resulted in no great epiphany. It felt predictable and expected, and lacking in energy or inspiration (interestingly, only two European museums are lenders, the Tate and the Pompidou, raising the question of how important the artist really is abroad).

Why wasn’t it exciting? It’s the struggle and the problem the MoMA has had for many years now. It sticks to the formula of the tried and true, the “we, MoMA, will show and define art history” throne, but by the time it does the show, the moment has already passed and the museum ends up looking stale. On the side they exhibit some younger, politically correct new acquisitions to show their sensitivity to the contemporary sensibility, but it feels uncommitted, and it’s mostly too little too late.

So, do I really not like de Kooning the show? I’m not blind, and of course his masterpiece Excavation of 1950 blows me away, as do the classic “Woman” paintings, but so much of the show is been-there-done-that.

There is one major exception, and here I must give credit to John Elderfield, the museum’s Chief Curator Emeritus of Painting and Sculpture, for the elegant way he has displayed the late work. De Kooning had gone senile by the end of his life, suffering from what we now call Alzheimer’s, but he continued to paint, almost until his death in 1997. Though some say the reduction of his painting style to only a brushstroke or two shows that his assistants did the work, or that he was no longer compus mentis, what do I care? I don’t believe in artist’s personal histories or care how many wives they had or cigarettes they smoked. I look at the work, not the person. To end his life by reducing his painting to only a few sparse brushstrokes was pure poetry, whether he knew it or not. I applaud Mr. Elderfield, who spent six years putting this exhibition together, for dedicating two large viewing rooms to the late work, because though the market for the late paintings has been strong, their credibility was always suspect because of the circumstances of their creation. MoMA’s decision to showcase them is meaningful, and frankly a show of only the late work would have been stronger and fresher than this voluminous “blockbuster.” Years from now that’s all we’ll remember from it: how this was the show that finally gave the late de Koonings permanent credibility.

A museum’s job today is a tough one, especially when the galleries often do shows that are faster and better than what the bureaucratic museum world can deliver. Does this remind you of the fable “The Tortoise and the Hare”? Are you thinking the museums will win in the end? Well, they won’t, at least not until they change their modus operandi by keeping a finger on the pulse of the zeitgeist.

Though the chaotic appearance of a Pollock or the radical tension in a Barnett Newman makes those artists feel more relevant than the painterly de Kooning, ultimately the Abstract Expressionists as a group, and the romantic myth around their lives and loves, are very far from what today’s art is about. The art world of now is about graphic imagery, sexuality and the media; it reflects our experience of the world around us.

I’ve just toured the Istanbul Biennial, with artists from Turkey, Lebanon, Egypt, Peru, Argentina and elsewhere The biennial is full of video, mixed media, photography and installation art. It’s political, it’s provocative and it’s about the world in which we are living. The era of creating and indulging in a totally subjective universe of painting to create a romantic and personal oeuvre is long over. That’s why Robert Rauschenberg and Andy Warhol still matter so much today, whereas so many artists around whom romantic myths have been built look less relevant.

To me, a museum’s role, in a historic show, is more than just executing a thorough curatorial job on the boilerplate, tried-and-true art history we all agree on. There needs to be a bigger vision, and a hook—a reason a historic show is done today and not a year or a decade ago. There is also the need to make the past newly relevant, to bring it alive to a younger generation.

These thoughts reminded me of Robert Rauschenberg’s Erased de Kooning of 1953. Rauschenberg famously took a small drawing of de Kooning’s and simply erased it, turning it into an artwork of his own. In the ’50s, de Kooning’s stature was huge, and to erase his work was unthinkable and irreverent, the ultimate Duchampian and postmodern act of destruction and creation. This was more than a small gesture that made art history; it was a sign of things to come, because ideas are more powerful than images.

Looking back at the 20th century, there’s no doubt that conceptual art prevailed. That’s why an encyclopedic de Kooning exhibition feels dated and even quaint; it’s great work that doesn’t reveal much about where we are today, and it may be a great show but it didn’t teach me how we got here.