When other GOP entities declared defeat in the face of a Third Circuit decision allowing Carl Lewis to appear on the ballot, the Drinker Biddle attorney made the heads-up call to secure yet another appeal. That decision enabled Republicans to prevail, landing the court’s reassessed decision to remove Lewis from the ballot.

The 8th District GOP senator can draw the shades for the remainder of the campaign season. Five months ago she was running against a legendary athlete – the Democratic Party equivalent of Jon Runyan without a football helmet. Today, she doesn’t have an opponent.

The 2nd District state senator welcomed the departure from the Senate race of longtime foe, Atlantic City Mayor Lorenzo Langford. Whelan insisted throughout the duration of Langford’s coy flirtation with an anti-Whelan Senate campaign that Langford’s theatrics would have little bearing on the contest’s final outcome. But the perception of two Democrats in the race was unhelpful, to say the least. Now as he tries to defend his seat against Assemblyman Vince Polistina (R-2), Whelan at least won’t have to worry about Langford sniping at him onstage.

Those members fearing a heavy lift didn’t get one this week. Indeed, it took more time to set up the theater for the august-looking body to take the stage in Camden than it did for the 13-member panel to conduct its hearing. 13th member Dean John Farmer lowered the gavel around the half-hour mark and it was over.

“Very engaged” in the prospect of running for the U.S. Senate in 2012, the conservative state senator from Warren County learned this week that Bergen attorney Ian Linker (running as a Tea Party candidate) decided to end his rightward run for the party nomination to challenge U.S. Sen. Bob Menendez (D-NJ).

The PolitickerNJ.com/State Street Wire reporter and his wife welcomed the birth of their second child, Evan.

Running for an Assembly seat in the 38th District, the mayor of Maywood suffered a humiliating headline when Councilwoman Marianne Auriemma announced that she was changing her party affiliation and endorsing Eustace’s Republican rivals.

The Olympian proved as herky jerky and ultimately sputtering a politician as he was graceful and legendary as a sprinter. His Democratic candidacy finally flamed out today when he gave a nod to yesterday’s verdict judging him not legally a resident of New Jersey long enough to qualify to run for the state Senate.

The East Ward Democratic leader was on the blunt end of questioning from African-American leaders in Newark about his tape-recorded refereces to “shines” on tapes played in the corruption trial of Ron Salahuddin and Sonnie Cooper.

State law enforcement authorities this week arrested the Elizabeth Board of Education president and charged her with falsifying information on applications for the Elizabeth Public Schools Free and Reduced Price School Meals Program, which led to the theft of a total of more than $7,000 in free or low-cost lunches.

The former mayor of Union City was charged in Hoboken with driving while under the influence.

The mayor of Paterson told reporters he didn’t know if he and key members of his administration deserved $20,000-worth of overtime compensation for work hours during Hurricane Irene. The remark to the Bergen Record infuriated fellow party members, who had to remind Jones that his job is a 24/7 responsibility. 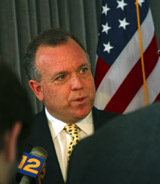