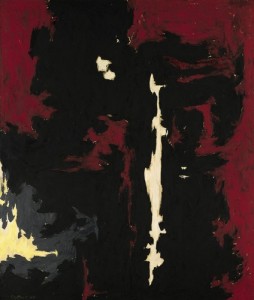 Prepping for its Nov. 9 contemporary art evening sale, Sotheby’s has released details of the four Clyfford Still paintings that it will sell on behalf of Denver, which is home to the Still Museum, which will open in November. The works are expected to fetch between about $50 million and $70 million, well more than the $25 million that the museum has said it wants to raise for its endowment.

Four of the three paintings come from the 1940s, relatively early in the Abstract Expressionist’s career, and two of those date from between 1946 and 1950, which Sotheby’s referred to as the artist’s “most triumphant period” in a press release announcing the sale.

Sotheby’s won the approval to handle the paintings from the Denver City Council over its rival Christie’s, which initially objected to the decision, arguing that its proposal had not been given fair consideration. Heading into the November contemporary art auction season in New York, the paintings could give Sotheby’s a decisive advantage.