Ashley Cardiff and Jennifer Wright of The Gloss, not looking at each other.

Ladies’ blog The Gloss is conducting an interesting experiment: Editor-in-chief Jennifer Wright has decreed that for the entire day she and deputy editor Ashley Cardiff will not make eye contact with each other.

“It’s just an experiment in trying to live like a movie star,” Ms. Wright tells us over Gchat, which is how most normal people communicate while sharing office space. Right?

So far, the trial has devolved into the two coworkers writing increasingly vitriolic tweet-like updates on the site about their current non-visual status. For example:

‘Don’t Look Me In The Eyes’ Day: There is a chasm deepening between Jennifer and I that is filled with hate. -Ashley

Don’t Look Me In The Eyes’ Day: Sarabella and I have begun gossiping about how we never liked looking at Ashley’s wild, bloodshot eyes, anyway. – Jennifer

Ms. Cardiff  writes to us of her discomfort:

“The most striking thing about it is that our conversations today have had this bizarre tension, even when we’re just talking about regular daily stuff. Also, I’ve honestly experienced a pervasive paranoia that she’s mad at me or likes me less for some reason? The whole thing is actually really off-putting.”

But is it really that weird not to look coworkers in the face, especially when your job involves blogging? What could be worse than those people who stare too intently into your eyes while asking what you want from Starbucks? Or that traumatizing experience of looking directly at a coworker while asking a question and having them totally ignore you, right in front of everyone? No, it’s better just to hunker down in front of this pretty screen and hope that by the time Skynet turns all the machines against us, we’ve learned better social skills.

An informal poll around the New York Observer‘s own office (all over Gchat) reveals varying degrees of comfort with eye contact. Some lament that they probably don’t do it enough, while others say it depends on the layout and/or general camaraderie of your office.

Without revealing any office trade secrets, let’s just say that it’s never a good idea to actually try to talk with a coworker about eye contact while staring at them, because the meta-discussion will lead to a socially awkward crisis that will eventually force them to look away. Sure, they might act as if you are just bothering them with asinine questions while they are busy editing stories to put a paper out on time, but you will know the truth.

In conclusion: Workplace eye contact should be avoided unless completely necessary. That’s why God created Instant Messaging services. Now everyone, stop throwing up your Invisible Status when we can see that you are right there at your computer! 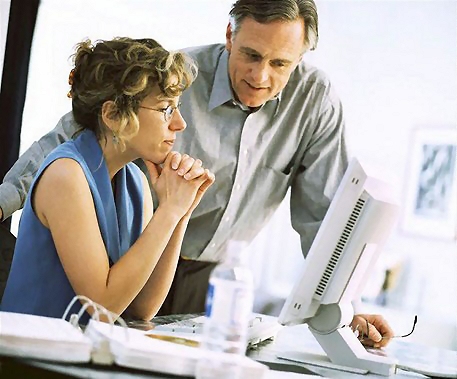