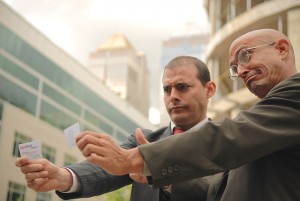 Days after members of the Russian art collective Voina called on artists to boycott the 4th Moscow Biennale, alleging that their name was being used to represent work that they did not create, they have begun to garner some support from fellow artists, with the Yes Men art activist duo announcing that they will join the protest.

Voina has released a statement from Mike Bonanno, the nom de guerre of Igor Vamos, an associate professor at the Rensselaer Polytechnic Institute, in Troy, N.Y., who is one half of the Yes Men, asking for advice about how to boycott. Mr. Vamos wrote under his pen name:

“We can boycott, sure. Is there any particular method that you would like us to use for boycotting? We can tell the organizers that we boycott. We are supposed to do a thing via skype… we could use the opportunity to read a statement from you. the event is live so it would be a chance to speak these words in front of the audience. we could just read the statement and be done if you like.”

The Yes Men had been scheduled to participate in a conversation about their activities—which have included posing as executives for multinational corporations, apologizing for wrongdoings—as part of a special exhibition at the Biennale on activist art.

The Voina members who called for the boycott claim that a work made by former members of Voina is wrongly being labeled as a work by the activist collective, though the artists behind the work in question claim they still have the right to use the Voina name. “It is our right to refuse participation in this pile of shit, and we intend to make it so,” said Natalia Sokol, one of the artists protesting the Biennale, said in a statement.