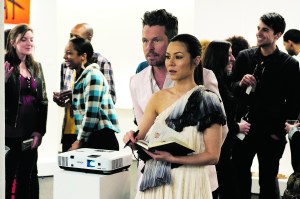 Let’s pretend you’re bedridden — you and Grandpa Joe and the rest of the elderly Buckets. This isn’t like real life, where you would never spend 12 hours straight in a horizontal position, tuning in to television marathons and only bending your knees occasionally to prevent blood clots. (We certainly have never done that! Awkward laugh!) But here you are, and here you’ve been, in bed, for so long that you can’t recall much about the real world, let alone the real art world.

Although you once pranced among the culturati, you have forgotten the acrid smell of freshly whitewashed gallery walls, the sound of a gavel landing at Christie’s with a thunk to hammer in a $16 million sale (anyway, back when you were globetrotting with the tastemakers, it was a couple million less). These days, you couldn’t even pick Larry Gagosian out of a lineup of silver-haired megadealers.

Suddenly, a daylong block of The Real Wives of Atlanta comes to an end and a Bravo program you don’t recognize flits onto the screen. It is season two of Work of Art: The Next Great Artist, and it is your chance to reconnect with the world of contemporary art. If you tune in each week, by the time your atrophied body returns to fighting form, you can spring back into the ranks of the art world’s movers and shakers. Did America’s Next Top Model not teach you how to smile with your eyes? Did Top Chef not teach you how to make sea scallop foam?

So prop yourself up on some pillows and pore over our weekly study guides from Contemporary Art World 101, as taught by the tenured professors at the University of Bravo.

WEEK ONE: In which we learn about the pitfalls of influence and appropriation

SUMMARY: In the inaugural episode of season two, we are introduced to our 14 fresh-faced contestants, evenly split between men and women, with one black man, one deaf Malaysian guy, and one lady who was recently mowed down in a hit-and-run accident. There are no blond people in this group, but two people wear glasses with thick black frames. Feel free to apply this ratio to determine the racial, gender and accessorizing breakdown of the art world at large. The work produced by these contestants is judged by a displeased-looking journalist, an auctioneer with a European accent, a tall-haired gallerist, and a rich, confused-looking socialite. (x100 = art world).

When tasked with transforming tacky thrift-store tchotchkes into fine art under severe time constraints, the artists variously grow agitated, flirt, throw sparkles around and talk about Lord of the Rings. When they present their work to the panel of judges, they receive searing criticism, fight back tears, and try to use very long words to defend themselves. Nobody brings up Clement Greenberg’s relevant text of 1939, “Avant-Garde and Kitsch,” because, as in the broader art world, nobody remembers what it is about. (In fact, it’s about how the consumerism of modern capitalist societies leads to the dumbing down of culture, which is to say, it’s about reality television.)

The woman who was hit by a car­—Michelle Matson—wins for something that looks like a cartoon totem pole placed in front of a painting of the sky, toward which a paper skeleton crawls. A hunky French man named Ugo Nonis is booted off the show for an abstract red cut-out thing that hangs in front of another red thing, and looks like any/all work created by the famous, dead street artist Keith Haring.

LESSON: A successful contemporary artist can be derivative, but shouldn’t be so derivative that even the socialite art-world-arbiters can identify who is being ripped off.

Contemporary art—as even you, held hostage by your debilitating condition probably know—can be an interesting, postmodern sampling of pop references, of random items plucked wholesale from the deluge of information that is available to us today. But it’s still not good to be unoriginal. And it’s certainly a no-no to plagiarize. (If you could only convalesce and clamber out of bed you could learn all about the brouhaha surrounding appropriated imagery in Bob Dylan’s paintings, and the lawsuit against Richard Prince—but perhaps it’s best you not be overwhelmed with too much actual information.)

“I recognize the similarities between Keith Haring and my work,” Ugo Nonis told The Observer after being eliminated from the show. “But I think Keith Haring’s work looks like another thousand artists. I think my style has similarities but the fact that I’m doing it and I love doing it­—I have no reason to shy away from it.”

Filed Under: Arts, work of art