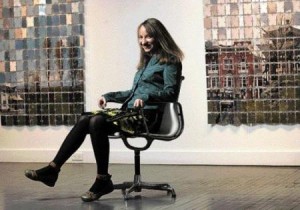 Yesterday a tipster informed us that we should point our Gallery Girls investigatory powers in the direction of Eli Klein Gallery, located in SoHo on West Broadway, between Prince and Houston, the skinny being that they too were participating in the Bravo reality show that promises to “follow the lives of six young, 20-something women that work in New York City’s hippest art galleries.”

When contacted on his cell phone yesterday, Mr. Klein, who specializes in contemporary Chinese artists, offered something of a non-denial confirmation.

“I can’t really talk about it,” he said, and demurred when we asked if anyone working in his gallery would be featured on the show. Near the end of our five-minute conversation, we told Mr. Klein that we’ve been doggedly covering the show in the service of our readers.

Last Friday we discovered that the show was in the process of shooting when we stumbled on a film crew at another participating venue, End of Century, at Eldridge and East Houston.

As always, tips to dduray@observer.com, please!