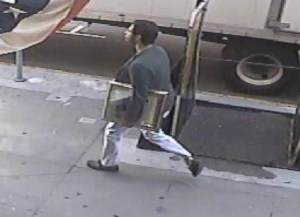 Mr. Lugo with a Picasso under his arm. (Courtesy Lefty O'Doules)

Mark Lugo, the former Per Se sommelier arrested this summer after a number of stolen artworks were found in his Hoboken, N.J., apartment, has plead guilty to taking a $275,000 Picasso drawing from a San Francisco gallery and been sentenced to 16 months in state prison, The San Francisco Examiner reports.

Mr. Lugo has been sitting in jail for some time, meaning that, with credit for time served, he will be out on Nov. 21, at which point he will be extradited to New York to face charges that he stole work from a number of Manhattan galleries and hotels. According to the Associated Press, those works include:

It’s really a pretty classy, varied selection of work. Mr. Lugo’s lawyer has said that his client stole work as part of a “psychiatric episode,” noting that he had no prior criminal record.