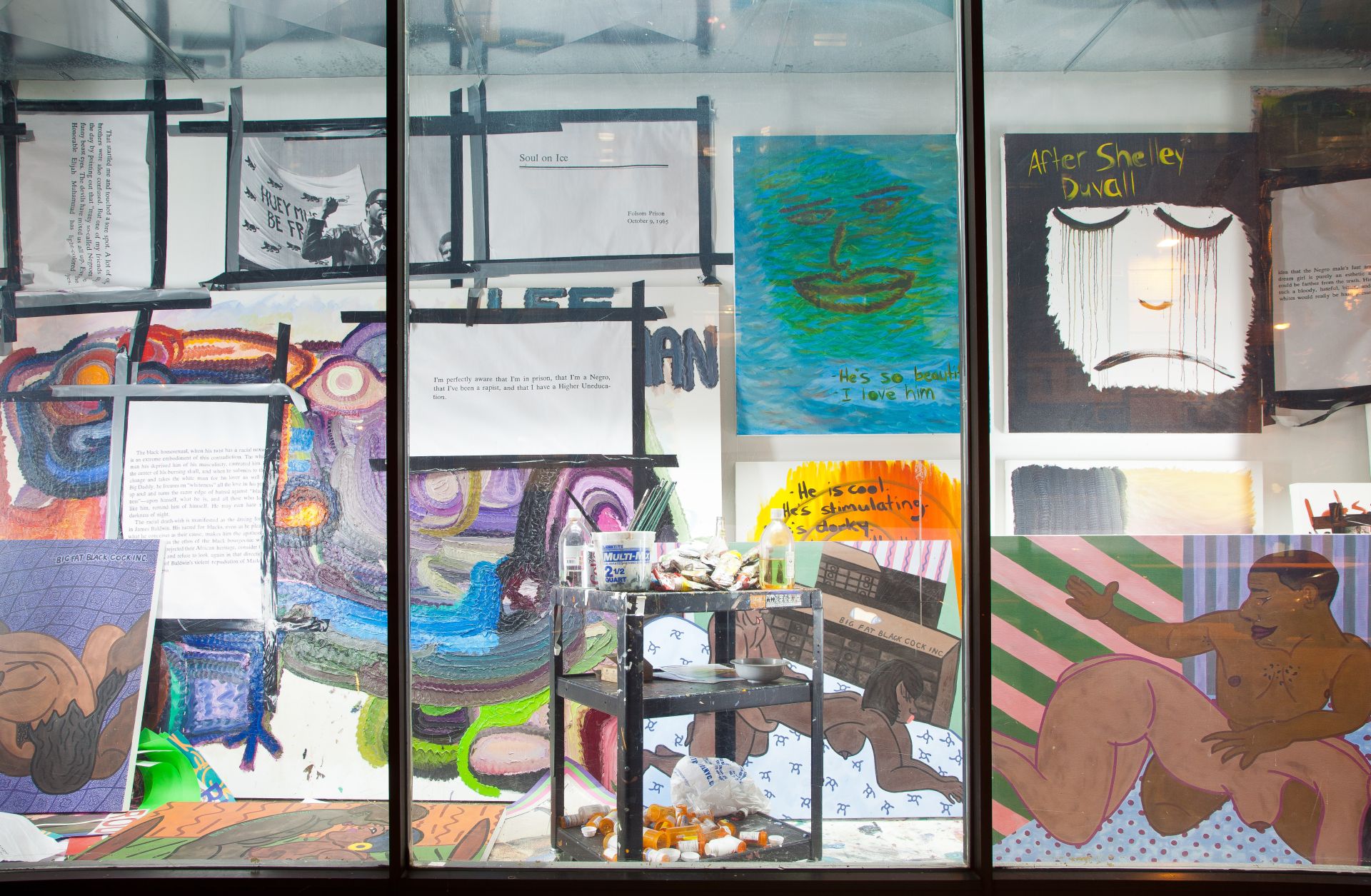 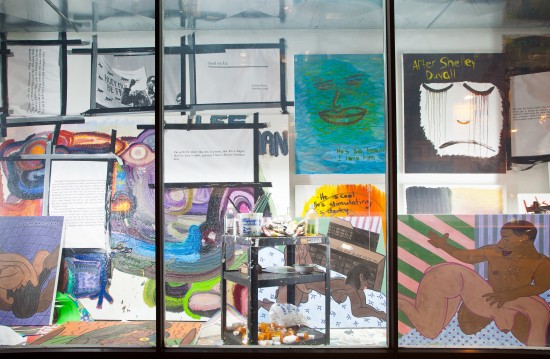 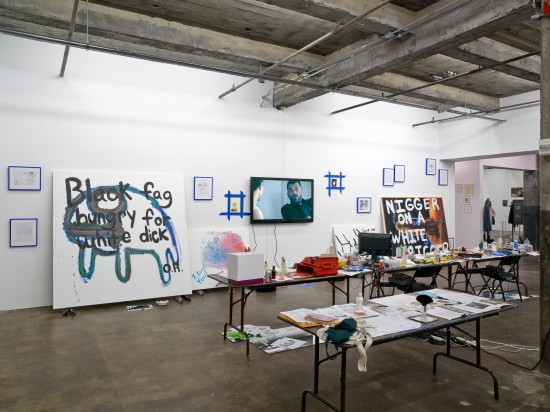 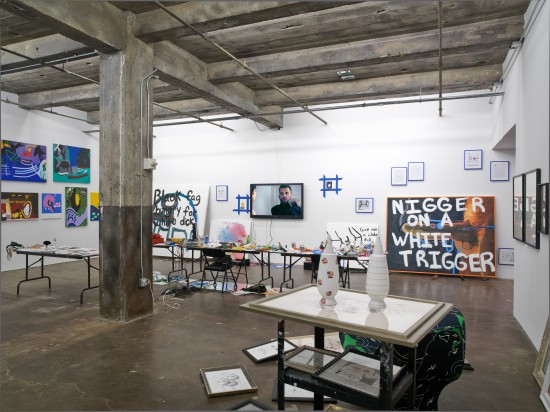 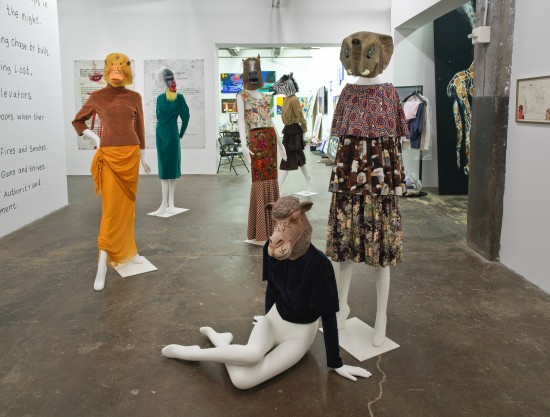 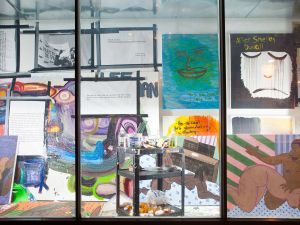 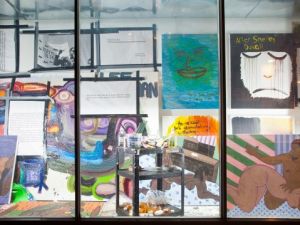 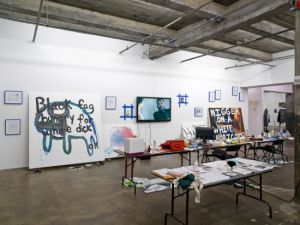 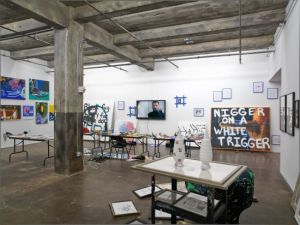 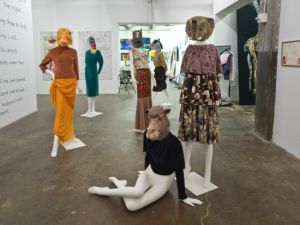 Take just one moment and visit stabfrenzy.com, a website run by the Norwegian painter Bjarne Melgaard on which he documents some of his work.

We just did and, clicking through the pages at random, saw a photograph of Mr. Melgaard shirtless, cradling two small dogs, as well as dozens of installation views of his shows at galleries around the world. There are scores of his paintings too, which look like they were produced by a manic, enraged neo-expressionist. There are bulbous cartoon figures and photorealistic images of elderly people and a child soldier. There are neon works too: “THE WORLD IS FULL OF RICH CORRUPTED CUNTS,” one reads.

“The idea of Stab Frenzy was showing how much was produced,” Mr. Melgaard told us. “I feel in New York people are very careful. I prefer to make 500 paintings here. You’re not supposed to do that because you can’t really auction results.” He speaks quickly and calmy, with a thin Scandinavian accent that sounds somehow German. “Sometimes I feel like making five and sometimes I feel like making 5,000.”

We were sitting in a back room of the Maccarone gallery in the West Village last month, and Mr. Melgaard was in the process of installing a gigantic group show. He is well built and was wearing a T-shirt and sneakers.  A hat on his shaved head read, “FUCK YOU PAY ME.”

Earlier, we had met Mr. Melgaard’s lover, Omar Harvey, a tall, rail-thin black artist who was wearing a wife-beater shirt printed with the Budweiser logo. He stood near one of his paintings, which said in tall black letters, “NIGGER ON A WHITE TRIGGER.” As we had waited for Mr. Melgaard to finish work on the installation, Mr. Harvey explained that there had been trouble earlier in the day.

In the windows of Maccarone, Mr. Harvey had placed paintings by a group called Big Fat Black Cock, Inc., paintings that essentially were copies of William Copley’s copulating lovers remade with black characters. Some neighbors had been offended and called the police. At the moment, the windows were covered with paper.

“I think that’s incredible,” Mr. Melgaard told us in the back room. “I think those things are incredibly beautiful, and they’re made by African Americans. It’s kind of like—whoa, there are black people in America who do not feel inferior to white people.” The artist is from Norway (he represented the nation in the Venice Biennial this year), and when Big Black Cock had a show there, he said, the work sold out. No one had raised an alarm.

The show was set to open the next day, but the space looked unfinished. Paintings and palettes were strewn about the galleries, and a few works looked just barely dry. But this is typical. Mr. Melgaard’s shows often look as though a SWAT team of neo-expressionists ransacked them. They are orgiastic, Dionysian. Though there were 20 artists in the show—including trademark names like Richard Kern, Martin Wong and William Pope.L—it could have been a Bjarne Melgaard solo exhibition.

“It’s this idea about when your studio becomes your personal hell,” Mr. Melgaard explained of the show, which he said began out of the idea of “heterosexual failure.”

“You made all these works about violence and all different things to people and then suddenly you walk down the hall and you don’t feel safe anymore.” Email messages and letters by the artist and acquaintances that were arrayed around one gallery allude to a stalker, a hospitalization, homicide.

Fact and fiction intermingle. But, “the truth is I’m just a big bore,” Mr. Melgaard said. “We haven’t killed anyone or anything like that, but the things that seem most likely to be fictional are the ones that are not.”

This sense of terror, Mr. Melgaard said, is why he gave the exhibition its unwieldy title: “After Shelley Duvall ’72 (Frogs on the High Line).” (It is open through Saturday, Oct. 21.) In The Shining, he said, Ms. Duvall “somewhat becomes her own violence. Her silence.” He shuddered and continued without breaking, “Honestly, if I had her around I would become Jack Nicholson too. Because she is so fucking annoying, so terrorizing in her silence that she is the real moment of horror in that film.”

This all sounds a little horrible now, but Mr. Melgaard is persuasive and charming. It made a certain kind of sense at the time, and we agreed with him. He later admitted that he had his reservations about the violence that pervades his work. “What took place in Norway was so horrific for me that I couldn’t even look at it on TV,” he told us, after we asked him about the right-wing shooting and bombing that took place there this summer. “My mom was one hour from being killed, because she walked on the same street.”

Mr. Melgaard has long been interested in a kind of “amoral painting—how can you paint this way without feeling guilty?” But after the shootings in Norway, he said that he asked himself, “I work so much with violence, can I even do the same things anymore? And then I just feel like you can.” It would be “fake,” he said, to change his practice because of current events. In any sense, he said, “Fear controls our society totally, I think we live in fear. I think we terrorize each other.”

Mr. Melgaard’s work could be understood a rejoinder to that phenomenon. Its relentless production represents immediate, fearless fulfillment, the gratification of personal desires–no matter how ostensibly base, immoral or antisocial–through art. Questions or taste and quality become slippery and messy.

The artist, for instance, said that he was thrilled when he learned that the blog Art Observations with Jerry Magoo had compared him to the American metal band Slipknot. “I really felt like calling me the Slipknot of the art world was the biggest compliment I could ever get,” Mr. Melgaard said enthusiastically, nodding his head. “That’s the worst band ever. They’re so awful. There is nothing cool about them.”

Mr. Melgaard approached Sam Pulitzer, who writes Art Observations with Mathieu Malouf, about making work for the show. Messrs. Pulizer and Malouf ended up produced works together, and Mr. Melgaard hung suits from some of their pieces, for one of the show’s unusual collaborations. “What is collaboration, and can anyone really collaborate?” Mr. Melgaard said he asked himself. “Do we need to call it a collaboration because other people have worked on it?”

Designer and bookseller Brendan Dugan helped produce dolls in the form of Matisse figures, and Artforum associate editor Caroline Busta worked with him on another piece, sending him images from the Internet.

The former no-wave singer Lydia Lunch declined to participate after he extended an invitation, but asked simply that the artist print the text of an acerbic email that she wrote decrying New York on one painting, and send her half the profits if the work sold. Mr. Melgaard complied. After selling another painting, though, he decided to screen her text again on top of that one, without telling the new owner. That buyer will now need to decide if he or she still wants the painting.

As we were preparing to write this piece, we called Maccarone. Another gallery exhibition had suddenly appeared on their website, this one called “The Social Failure,” and we were confused. Mr. Melgaard had recently returned to the gallery and installed a new show within that show an employee there explained. “Shelley Duvall” had been rearranged and reconfigured and augmented.

We thought back to our conversation. “I came to do a show about what I think is interesting,” he had told us. “I feel like everyone says, ‘This is so boring, this is so boring.’ You should try to make something you like then.”

Correction, Oct. 21: Sam Pulitzer created works for the show together with Mathieu Malouf. An earlier version of this article did not note Mr. Malouf’s involvement.