“They’re probably too over the top to be taken seriously,” a Democratic source said wearily, decrying the outright misleading context of the pieces.

The Republicans – Mount Laurel Mayor Jim Keenan and businessman Chris Halgas – want to break the strangle-hold Democrats have on the lower house in the 7th and unleashed their mail pieces in time for Halloween, leaving the Democratic incumbents seething.

“Singleton backed $10 billion in new spending and drove up the average property tax bill by $3,000 on families, seniors and small businesses,”  read that portion of the two-for-one mailer that apparently reached back to Singleton’s days as a Democratic legislative staffer.

“A record of raising taxes and killing jobs,” the campaign mailer pronounced. “Part of the problem in Trenton.

In office since the summer as the Democrats’ replacement for retired Assemblyman Jack Conners, Singleton was outraged.

“I think it is an outright attempt to mislead voters,” the assemblyman told PolitickerNJ.com.

“For instance, they source an article from March ’98 as a foundation for their attack on me. I was ONE month into my service in state government. This is consistent with their entire attack mail program that has sought to assign every ill-perceived policy decision made in Trenton to me,” Singleton added. “These tactics are what voters tire of and lead to the cynicism we see about government by the public. I am more than willing to stand on my record of creating jobs in both the public and private sector, as well as my bi-partisan tenure of fiscal stewardship as a member of the Burlington County Bridge Commission. I doubt that my opponents are able to do the same about their records.”

The Republicans in response offered no sympathy.

“How is that different from the Democrats releasing a mail piece that accuses Jim Keenan of losing 200 jobs because the DEP wouldn’t allow a facility in town to create jobs?” asked Burlington County GOP Chairman Bill Layton. “It’s silly season. Look, it is a dead heat right now, and will be right down to Election Day.” 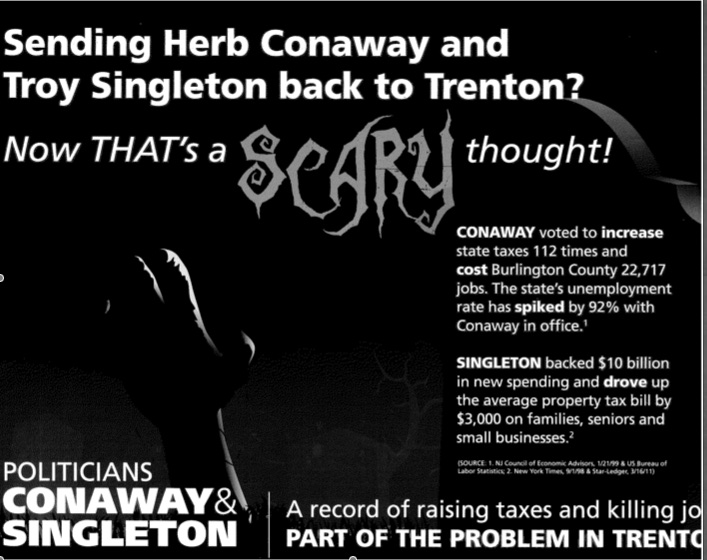